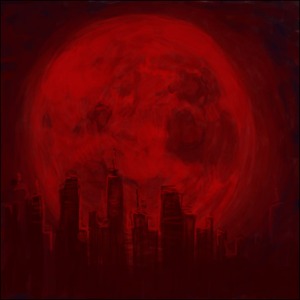 You wake up in a strange place; the outskirts of some strained and cracked Metropolis. The streets are littered with potholes and debris: the sound of hounds baying in the distance. Yr not sure where you are; yr not sure WHO you are. It sounds like those dogs are getting closer, and you begin to experience THE HORROR, you begin to feel like prey. You start to move in a direction, any direction. As long as you are walking, yr still living, and when there’s life, there’s hope. The streets are unnervingly derelict, with burned-out, junked up automobiles clogging the streets like dust-bunnies. Yr beginning to feel like the Last Human at the End of the World, and yr wondering if you slept through some viral outbreak or zombie apocalypse. Static shards prick yr ears from North by Northwest, and you move in that direction, grateful to have a North Star in this gray blanket fog limbo.

The sounds originate from a bomb shelter convenience store, and it is here that you find the first fragments of intelligent life on Earth, although it is unclear from outside if the sounds are Human in origin, or just a macabre recording, playing out Eternity onto deaf ears. The sounds: a mixture of fried circuitry and top-40 club pop, songs giving way to line noise, deteriorating mockery of the world you once knew, but still comforting, a reminder of the world you left behind. You decline to investigate the origins of this racket, but draw strength to continue, and move on.

Somebody is still living in this concrete jungle, even as evening falls, and you detect the traces of big, meaty predators, waiting in the wings. Night time: the law of the jungle, and you feel the small mammalian urge towards sanctuary, a small hole to hole up against hungry, knifelike eyes. And there it is, like a telegraph from SPACE, the drums in the distance, a port in this fucked-up anonymous storm.

And there they are, the rest, the remnants: the tribes of the moon, yr new family. Gathered around hibachi temples, they dance and sway in paint and rust, soldering wire jewelery and cut glass shades, junk store shamen and junkie messiahs, dancing together in long shadows, the drummers beating a tattoo against the night: 1, 10, 1000. Drummers against the night. They play the rhythms of space stations and flaming satellites, morse code love letters to lovers dead and dust. Tinny radios and guttering shrieks meet the pounding of feet on slate: you find a spot none-too-slimy to rest yr eyes and ease yr fears, taking comfort.

You fall asleep, awake again in time for the main attraction, the new sacrament. The High Priestess takes the stage with a stomp and a yell, a bone flute wails like old jazz. A battered projector, salvages, suddenly throws moving images of Africa and Iraq on the alley walls, the cradle of the former, the beginning of the end. Here, white blurs and blends with black and grey, and yr not entirely sure the person sitting next to you is HUMAN. The continent of origin is a rather moot point, and you begin to sway and move with a crowd, and fall into yet another DREAm.

Artists seek to make their dreams and reverie a reality, drawing out what lies behind their fluttering eyelids into the incandescent light for all to see. They build worlds, populate them with impossible preachers and creatures, and drop you in the center. It’s like being airlifted into an unknown mountain range. It can strip the patina of preconception from yr ears, leaving you innocent, possibly afraid and confused, but really seeing. Call it beginner’s mind, no mind, they won’t mind. You’ll feel like a tiny hamster out in the night, and that descending shadow could be an angel of the lord, or the specter of the Great Owl. One thing’s for sure: yr awake, paying attention, and it is from this crossroads that true art, real creativity, arise.

Every band that graced The Ash Street Saloon‘s battered, elevated stage Wed. night were true artists in every sense of the word. Fred Meyer reminded us of the sheer freedom, power, and possibility of noise, with three ladies operating stacks of archaic outboard electronics, with stacks of delayed vocals on top of tense wiry bass guitar. Started off kind of shaky (just noise) before coagulating into a transporting reverie that set the mood for a fantastic evening. It was kind of funny to watch stragglers coming in from Voodoo Donuts waiting for the dubstep drop, so they could DANCE THEIR ASSES OFF, wait in confused repose, washed away in ambient static and wordless cooing.

Alto! are two drummers and a guitarist. I’ve seen (and written about) them before, but they’ve really gotten their shit together since then, and were impressively cohesive. They just released a new LP on vinyl, and are kicking off a West Coast tour, so if you live on this side of the country and have not yet had the pleasure, do yrself a favor. And, of course, tell yr friends.

And last but not least, Million Brazilians, whom Derek Monypeny called ‘The Best Band In Portland’. Since i first became aware of them, local banshee/siren Suzanne Stone, who plays solo as White Gourd, has joined the band full time, on sax and voice, and were a trio for the occasion. A funky hodge podge of tape loops, tribal flute, sax, sword and African guitar, Million Brazilians are the Rebel Alliance against the Rough Guide Empire, a real time revolution against the Simulacrum, the eroding corrosive hegemony. Their music will turn you on to whole galaxies of abstract jazz, free noise, tribal trance and real magick.

Everything that anyone affiliated with MB touch is true art, so i’d highly recommend following along with the crew at:

The Brazilians will be touring Central Europe in Sept. so check the tour dates and catch a glimpse of what we get year round.

If yr not in Bulgaria or France or Portland, but still want in on the action, White Gourd has just released her first LP, a 12″ on Psychic Sound Research, with interpretations of The Hermit and The Moon tarot cards.

You can find that here: http://psychicsounds.bigcartel.com/product/white-gourd-hermit-la-lune-12-lp

or get a taste at:  https://soundcloud.com/white-gourd

Ash Street Saloon is turning out to be a hotbed of experimental (and other) musical activities. A number of musicians from other influential Portland noise bands were out in support, and it really goes to show that there is a part of this city that is supportive, tight-knit, warm and inviting. Check it out.