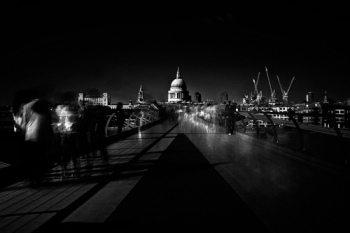 i had a dream from the heart of doom: Drifting w/ The Psychogeographical Commission.

What we’re trying to do in the music is expose listeners to ideas and methodologies so that they think about how they approach the reality they construct for themselves by using the city as a meditation point, hopefully we can stimulate a bit of imagination to let people think twice about their surroundings and the effect it has on them. We ultimately want listeners to formulate their own mythologies around the things important to them, so we overload the albums with symbolism, myths, occult history, etc, so the listener can use the bits which have the most resonance for them and ignore the rest, I suppose you could call it an inoculation against organised religion or group-think.

We are surrounded. Barricaded, bombarded by sensory stimuli and thought control, invisible eyes of societal conditioning sculpting our movements, speech, action. We are penned in. It makes perfect sense, might even be preferable, to shut down, close off, there’s just too goddam much going on! Our wild nervous systems go haywire, like a dire wolf on Madison Ave. This is not biologically advantageous, however, it’s unnatural; predator and prey alike need to have sharpened perceptions of their environment, or else starve to death or become dinner.

Which causes The Psychogeographical Commission to claim: “After a great deal of time wandering the back streets of London and other large cities looking for the spirits which now dwell within them, we came to the conclusion that the psychological make-up of cities is now at odds with the populations inherent rural based mythology.”

The Psychogeographical Commission use a mixture of folk and rock, cosmic stream-of-consciousness verse, found sounds and electronics to summon the Genius Loci, or the spirit of a place.

While blinders and sedatives may be mandatory for thriving in a hectic urban environment, they are diametrically opposed to Art and philosophy, things that require a wide-open stare, a hungry inquisitive mind, sharp eyes, keen hearing, and a tender heart. Perhaps this is part of why Situationism, the movement that gave birth to the term psychogeography, was so vilified by the powers that be. Situationists championed wandering around for no good reason, and the reclaiming of public places as places of leisure. A society with a bunch of people wandering around, doing gods no what, would be nearly impossible to monitor and control. Situationism also challenges subliminal attitudes about productivity and what constitutes a ‘sane and rational member of society’.

Psychogeography, utilizing a technique known as the dérive, seeks to undermine this callousing of the senses, stripping the mind of conditioning and allowing it to experience fresh and new, with the eyes of innocence. This is accomplished by allowing one’s self to wander, directed by aesthetic impulse, letting themselves be drawn by the attractions of the terrain and the encounters they find there.

This is poetry as revolutionary act; leisure as artistic protest.

Psychogeography means finding new ways of looking at things. Whether it’s staring out outdated road maps, ghost hunting, or obsessing over some historical minutiae, it allows you to strip the scum of experience from thine eyes, and fills you with a new sense of wonder and curiosity.

‘What else has stood on this very spot?’

It’s like a zen koan, guaranteed to break the Monday blues.

Psychogeography is an accurate analog of Forestpunk’s main premise: knowledge, awareness and appreciation. It is too easy to become inundated and overwhelmed by experience and information at this stage in the game, if one succumbs to the illusion that you’ve been here before. Every day is a fresh adventure, completely unknown, and it takes a brave and hungry mind to embrace uncertainty and a seemingly endless procession of new experiences.

This same process can be observed with hunting for samples in movies and records, wandering aimlessly around yr neighborhood, exploring the library with no purpose or game plan. It gives you a way and a method to see yr own life fresh, to rip off the callouses, and to open the arterial veins of creativity.

Urban Psychetecture tells tales of lost rivers, forgotten gods, subways and discarded litter. All things repressed, shoved under the ground, like the river Effra. Urban Psychetecture, and psychogeography in general, could be seen as a return of the repressed, like Hamlet’s father, coming to write the wrongs of the past. Musically, it bears the most striking resemblance to latter-day Coil (they cover that band’s Lost Rivers Of London here) and Current ’93s David Tibet. This is to say, vaguely reminiscent folk melodies adorned with atmospheric electronics and ritualistic, theatrical vocals. The mood they conjure is distinctly Anglo-, although in a state prior to the whitewashed, neuroticized settlement that currently stands on the Thames. Psychogeography brings to light the energy of the land, the spirit of the place, and on Urban Psychetecture we get a vision of wyld, wyrd Albion; thatched mud huts with burning acrid smoke redding eyes in the twilight, while kings and giants lay asleep and dreaming beneath rolling emerald hills.

Urban Psychetecture is intended as a lovesong, and as accompaniment, to urban exploration. It’s textures and incidental interludes are meant to include and interact with the ambiance, with the artifacts of the listening environment. It’s meant to accompany you on yr own explorations, to get you to see yr own neighborhood with new eyes.

The UK is full of fascinating folklore, that is fun to get lost in for days and days. Who knows what mysteries lie in yr neighborhood?

Urban Psychetecture is a collection of choice cuts from The Psychogeographical Commission’s first 2 records, with some additional alphaludes. It is available as a free download from their bandcamp, and comes with the highest possible recommendation.

The Psychogeographical Commission will be making a rare live appearance at Unearthing Forgotten Horrors, a celebration of UK horror in music and film, on 11.9.13, at The Star And Shadow Cinema; Newcastle upon Tyne UK https://www.facebook.com/events/663912193638076/