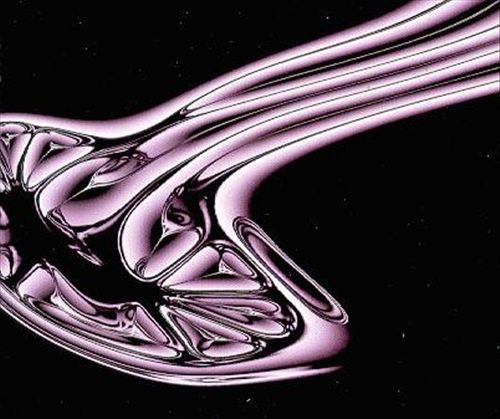 So today was the Autumnal Equinox (although it will most likely have passed by the time you get this), so we’d like to ring in our favorite season with a release from our favorite band.

In 1998, English occult noise merchants Coil heralded all the solar holidays with a series of limited edition EPs. Amethyst Deceivers was originally released on Sept. 22, 1998 in an edition of 1000 blood red and 20 light blue 7″s. These transmissions were recorded using Coil’s Sidereal Recording method, with the recordings begun the prior year, at the precise moment of the Solstices and the Equinoxes, to be revisited and finished later on. This was done to leave the recordings pure, to let the inspiration flow, and are far more improvised than most of Coil’s meticulously sequenced offerings.

I feel like the Solstice releases are the crossroads between Coil’s earlier, harsher, noisier fare, and their latter period pastoral electronic Psychedelia, and i feel like the air is right for a new appreciation of this band of mystics and their genre-fucking. On Amethyst Deceivers you hear strains of musique concrete, Pentangle folk, ritualistic chanting, and modern Classical music, courtesy of William Breeze’s viola. This is truly the intersection of the Ancient and the Modern, with the old Avant Garde predicting the postmodern meltdown that would take place in a couple of years.

At the time, there was hardly anything like it, and what there was, was so ludicrously underground, you’d probably had to have listened to Coil to find it in the first place. Mystical folk music, with an ethereal British quality to it, was met with rhythmic noise and ancient incantations. Allmusic.com put it “Rosa Decidua,” backed with descending chords on organ and further murky waves of noise, feels like a centuries-old ritual returned to life.” An electronic Paganism, that sings homage to Julian Cope, Captain Beefheart, Can, Kraftwerk and Karlheinz Stockhausen in the same breath?

Amethyst Deceivers admirably sums up a number of themes we’ve been digging at Forestpunk, presently. There is no name, no genre, for this visionary movement; just secluded cloisters of light, through the darkness of time, and it is our job to connect the dots.

Check these quotes from an interview from 1998 for The Wire magazine, with David Keenan:

I don’t know whether it’s an English thing or a Celtic thing or just a new way of being. It’s so important to be like that – it’s what being illuminated is, however you see it. It is in the mystic tradition, not necessarily English, although you can go back to William Blake, there is this resurgence, this emergence, of people behaving like that and being seen to be like that.

That’s the intention of it to go into a trance and achieve an otherness. We thought can we do this sort of electronic punk-primitive?

William Blake, pagan holidays, industrial rhythms, drugs, sex, occultism, psychogeography, it’s all there in Coil’s music. Between them and their work with related acts like Throbbing Gristle, Nurse With Wound, Psychic TV, Current 93, and a shitload of collaborations and remixes, Coil spread the virulent DNA that would explode into the blacklit descendants of the ’60s.

And then there was no Coil.

Balance dead, due to alcoholism. Sleazy died not long after, surrounded by beautiful boys in Thailand.

We were losing all our magicians. We had no alternative but to hide out in cheap apartments and dingy basements, with tattered copies of The Equinox, waiting and dreaming like King Arthur.

I began to notice a number of these themes gaining in popularity in the last few years, which is part of what led to Forestpunk’s inception in the first place. Coil represented a British mysticism, as influenced by Syd Barrett and Cabaret Voltaire as they were by mushrooms, flying saucers and crop circles. There has been an increasing interest in mysticism and the occult lately, but most people’s mind’s automatically think of Shamen and gurus, with most privileged white kids aping Saints, and going on pilgrimages to India. I love and respect a lot of things about the Indian culture and Faith, but i am not Indian. And i have been treated like an outcast and a freak and a devil worshipper, for some of my cthonic interests. So i created a place for the rest of us. And Coil helped develop and explore that place.

So that’s part of the reason why i’ve been exploring Psychogeography and the Atavistic Return lately. People are compelled towards ritual, and there’s many different kind of rituals, not just sweat lodges and fasting. Some of us are a little WILDER, a little more MAD. But the instincts are the same, whether yr losing yrself in the ego annihilation of Jefre Cantu-Ledesma or Prurient’s soul-shattering kick drum, or chanting the 100 syllabled name of G-d. And of course, you won’t be doing any of that, if you don’t know it exists, and even though i break TABOO by speaking the unspeakable (i am an aquarian after all), i’m here in the trenches, on the frontlines, out for blood and miracles.

Dig a stone. Spin a circle, widdershins, and all these mysteries come toppling out, like plague victims. Stone circles, lost rivers, ergot curses, two-headed children devouring Giants. The world and it’s ideas are so fascinating. We’re gonna dig through as many continents as we can get through in this lifetime, looking for the sublime.

I bring you, Coil’s Autumnal ritual. God rest ye, Jhonn and Sleazy. You are loved and missed. And this one is for the next wave, those indebted to and interested the dark arts and the sublime.

As an added bonus, we’ve got a special track for the Solstice from dessicant, which uses some samples from Amethyst Deceivers, mixed with some monolithic field recordings and other Autumnal ambiance, to help set the mood.

the white magick of the moon

the black magick of the earth