Teeth Of The Sea – MASTER

Teeth Of The Sea have got it right. They have somehow managed to coalesce nearly every vibe we revere, here at Forestpunk HQ – stentorian Techno, Argento soundtracks, blistering Metal, and spoken-word soundscapes. They’ve got it all. It is possible to contemplate never needing to hear another record, ever. The ultimate refined music, Detroit Techno and the score from Escape From New York, smelt down in William Blake‘s infernal print shop.

The exciting thing about MASTER is it’s part of a recent mighty surge of post-rock records, humans who dare to pick up guitars, bass and drums and try and make something personal, to push the envelope and make something personal. In the early 2000s, post-rock was practically all we listened to, until the whole form degenerated into post-metal posting. Everyone was aping, pantomiming. Godspeed You! had broken up; it was depressing. This year has seen brand new records from God Is An Astronaut, 65daysofstatic, Au4, Jesu, not to mention shoegaze revivals from Medicine and My Bloody Valentine, and new mutations like Blackgaze and Factory Floor‘s argon post-punk. For all the doomsaying, i’m crying to the satellites: we are living in a musical paradise. The Akashic Records have risen. We are becoming enlightened. 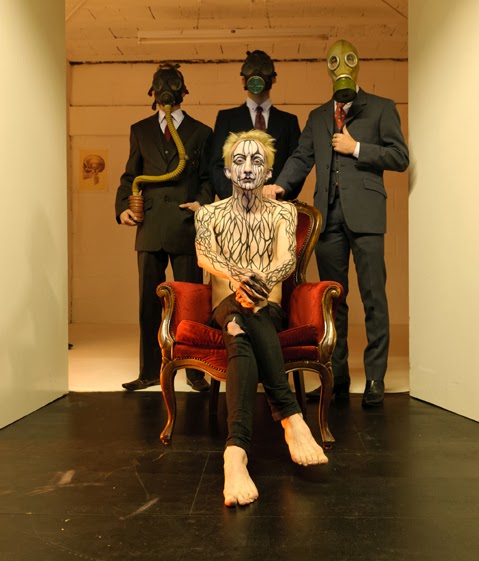 I wonder if it’s because we’re accepting the fact that we’re imitating, revelling in the jigsaw clockwork precision. I have heard it said that bricolage was the most honest of 20th century artforms. There is a movement, that i have been calling Hyperpop, music that examines the past with a microscopic precisions,  cutting out the bullshit. It’s the romanticization of stylization. I mean, let’s face it, those training videos that Vaporwave likes to sample were pretty shit, when you had to sit through them, but freakshows like James Ferraro and Daniel Lopatin noticed the murky sweaty codeine-induced hallucinodelic properties contained therein, and the world is stranger for it. There was a time when a critic would spend an entire review mentioning a band imitating its inspiration. That’s practically all anyone ever said about Stereolab.

On Master, Teeth Of The Sea have mastered their influences, sucked out the filled and created the H. R. Giger‘s Alien of a giallocore industrial metal masterpiece. It’s allied with homageicists like Zombi or Zombie Zombie, Umberto and The Giallo’s Flame, as well as recent blackblackblack dancefloor fodder of Haxan Cloak, Pete Swanson and Alberich. I’m not going to lie, i will unabashadely shout my devotion of all these acts, but Teeth Of The Sea have taken it to a whole new level. Their John Carpenter synths are the best i’ve ever heard, warm and glowing like Hal’s eye with Analog aura, and their metal is fierce and stomping, something like Neurosis. This is not some post-structuralist, postmodern fusion Frankenstein, lurching in some drunken half-life like a Putumayo remix. No, this is something new and unique. Teeth Of The Sea truly love, understand and play all these styles. It’s REALLY GOOD dance music; its REALLY GOOD metal; its THE BEST post-rock. I would say we could all just hang up our gauntlets and go home, but instead i’ll say that the gauntlet has been thrown, and we’re all just getting warmed up. MASTER makes me excited to make music, write about music. It makes me glad to be a Human.

Their list of influences could be read as a Forestpunk primer: Throbbing Gristle, Goblin, Heldon, Angelo Badalementi, Slayer, Byetone, Pete Swanson, Raime, Powell, Prurient, plus the unlikely mention of Giorgio Moroder. As if this record weren’t daunting and ambitious enough, they manage to incorporate moments of sublime, inspired Cosmic Disco, with vocodered vocals as sick as Tobacco’s, and a trumpet worthy of Morricone. I mean, fucking hell, as if it’s not enough to get metal and techno to hang together in a mix, to add classic soul jazz brass to sound as good as Miles, as well. Whoever mastered this record, i will lay the petals of roses at their feet. And then ask them for a job.

At Forestpunk, more often then not we look across the waters for inspiration. Our ears are like radio telescopes. In this case, we’re glad we did, as this seems to be blowing up in the UK, already reaping reams of reviews. Its been inspiring some pretty prose, so you’d be advised to see what everyone’s been saying. It seems like we’re on to something; anybody looking for a prime musical education is in a great place to get it. Many have lamented the digital cloud and the constant immersion in sound. I disagree; i think in the end we’ll end up with a whole generation with excellent taste.

Of course, we’ve waded through 10,000 hours of muck to get here. But here we stand, at the rend in veil, crystalline and gleaming, ready and able for the fight. Teeth Of The Sea have made a classic sci-fi headfuck, that screams like Tartarus but purrs like a hyperdrive. Get on board.

You can stream it via the wonderful 20 Jazz Funk Greats. Always a source of inspiration!

get a copy, via Rocket Recordings.