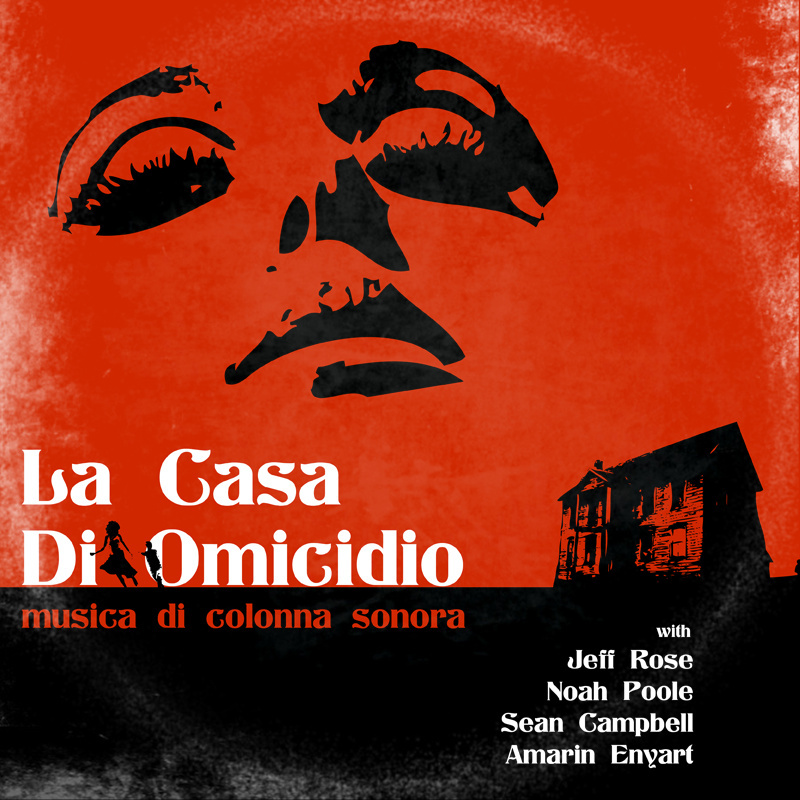 An Italian thriller soundtrack from 1979, made in 2012 in Brooklyn?

Welcome to another installment of Horrorscores, where we subvert yr waking dreams into a nightmare for an hour or so. We’re devoted priests of the obscure soundtrack, here in the turret, gibbering freaks for funky breaks and Atari grooves. Its kind of sick, but i spend more time listening to Library and Incidental music in my offtime than perhaps anything else, either digging around for samples or inspiration or the ultimate rarity.

Horror movie soundtracks have been our obsession, the past 2 years or so. It all started with Demdike Stare, and their occult manipulations, then the flames were stoked by the exquisite archaeology of Death Waltz Records, the authentic forgeries of Pye Corner Audio or Umberto. Finally, it gave us a reason to dig through all those years of hard drives from the internet, full of archaic mixtapes and mislabeled mp3s. There was a thrill in the past again.

This all dovetailed with a time where i was discovering the magick of handmade samples and handmade artifacts – crudely re-recording stuff, degrading it with guitar pedals, making static noise in basements. It gave me a newfound awe and respect for the perfectly-constructed sample, for the authentic illusion.

Because the thing is, although the past is a thrilling thing, and sonic archaeology is an endless (and highly fun) task, you will always run out. There will be an end to the rarities, to the reissues, and you feel like you’ve seen ever Giallo and Brian De Palmo movie 150 times.

Jeff Rose and Noah Poole have created an authentic prog Giallo soundtrack, from the borough of Brooklyn, in the year of 2012. Its a short slice of disco bloodbath, full of electric harpsichords and guitar wigouts. Ponderous breakbeats and Armageddon choruses. Somewhere between The Omen and Inferno, lies La Casa Di Omicidio. I am seriously hoping there is going to be an outbreak of dancefloors covered in cobwebs and candlabra.

They mention the famous Argento composers Goblin and John Carpenter as influences. Add Keith Emerson and you’ve got a match. Most of La Casa Di Omicidio is keyboard driven, full of grand and stately electric pianos and whirling organs, late ’70s chorus pads like you would hear on an old Danzig record and electric flute. This keyboard-centric approach, along with the authentic dusting of aging, puts this in line with the Ghost Box trajectory, particularly The Focus Group. And while LCDO have the same authentic veneer as GB, they are decidedly woolier and more frenzied Ghost Box’s rather polite and restrained approach. This is Giallo, after all, not Children Of The Stones. Knives will fall. Blood will rain. In waterfalls.

The overall sensation of listening to La Casa Di Omicidio’s all-too-short 5 tracks is of the lost and killer Soundtrack that never was. Full of headtrips and storming Library grooves – this is a head record if ever there was one, and i dare the adventurous beat-gourmand on these to put audiences under these grooves’ seductive spell. Because the rhythm section is one of the things that makes this record stand up, particularly on “L’Omicidio Euphorbia Milli (En, Cactus Murder)” which is a trve acid jam. These guys can get heavy, as well as creep. So major props to Sean Campbell, for capturing the voodoo.

The performances are ultimately what make this record, particularly the exquisite keyboard skills of both Jeff Rose and Noah Poole, especially on the track ‘Il Lungo Viaggio Dagli Inferi (En, Shelly Rides the Bus)’, which is downright classical, if played on an electric piano. Just goes to remind you, the rare bird of inspiration and classic beauty lies in unexpected grooves, and you can’t ever stop listening or looking.

That’s one of the beauties of stylized artwork like this – it gives someone a form to work with. A lot of critics gnash their teeth and tear their shirts over the death of originality, and rail against recreationist art like this. But i’ve heard it said, recently, as an artist first you ingest, then you imitate, then you innovate. We’ve all got to start somewhere.

La Casa Di Omicidio have a clear and deep understanding of Giallo and Italian soundtracks. The time travel to 1979 is complete, from the production to the instrumentation to the musical style, all witchy and freakout, even down to the warp of the imprint of a record on the album cover. Its a really impressive illusion; they’ve gone to great detail. But, in between the form and the clever graphic design, there are moments of real heart, true emotion, musicians doing what we have always done, pouring ourselves out through our instruments, no matter what the gig. The guitar at the beginning of “Un Sermone Compone nel Dolore Padre Giacobbe (En, Father Jacob’s Mass)” is tender and reminiscent, almost baroque. It’s a reflective ballad, worthy of Loren Connors, or Paco De Lucia playing slowly, before revving the album down with a funky freakout.

Fans of former Horrorscores inductees Yves Malone, Pye Corner Audio, Death And Vanilla, or Antoni Maiovvi, need to get this.

For those of us who have burned a hole in our Piero Umiliani and Riz Ortolani LPs, here’s a chance to replenish the crates.

La Casa Di Omicidio remind us to never stop digging, to never become jaded. To truly love what we love, to pay attention to the minutae. Remember, its the PAST in the PRESENT.

It is with real pleasure we announce La Casa Di Omicidio appear courtesy of Active Listener Records. The Active Listener is a vibrant community of psychedelic artists that we have the pleasure of contributing sometimes. It is helmed by New Zealender Nathan Ford, and started with the mighty fine Active Listener blog. A community built up around the artists being written about, people reaching out to the blog, and Active Listener’s monthly compilations. Nathan found himself with a cloverfield of musical talent around him, and Active Listener Records has been going insanely strong – they’ve put out 15 records so far! Its a winning testament to the musical ecosystem that is in the Aether these days, and it is inspiring to see a talented, heartfelt and homemade blog blossoming into a rainforest canopy of far-out sounds and stoned grooves.

I can’t wait to dig the rest of their stockpile, and start writing about zoned out jams for them again.