Emit – Spectre Music Of An Antiquary 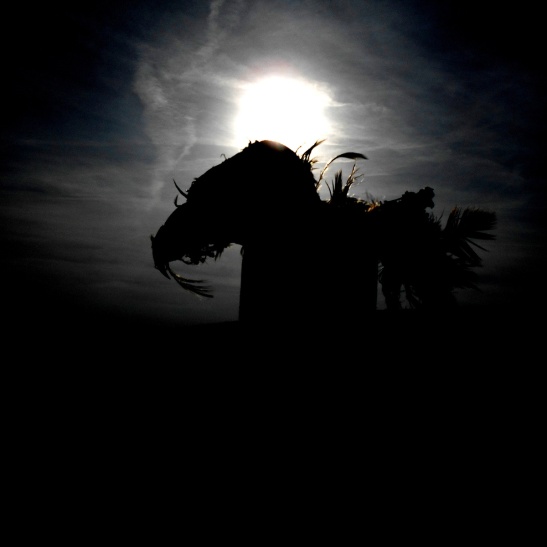 Enter a world of mildewing manors, where sentient black ooze dribbles from subterranean crypts; a realm of spectral landscapes and blasted moors. Enter the realm of Montague Rhodes James, as depicted on this crucial reissue from Crucial Blast, from blackened ambient producer Emit.

When dealing with Horror (or any genre with recognizable signifiers, for that matter), art tends to fall into three categories. There’s music from the thing itself, in this case the creepy soundscapes from classic Horror films; then there’s things that reference that original source material, or borrow directly from it – spookabilly, classic metal, music that samples from classic Horror or Sci-Fi films, or attempts to recreate those original sounds. And there’s the third camp; music that is intended to make you feel like yr inside a Horror film or novel (or Adventure or Science Fiction or Romance, or whatever yr bag is.)

Art, specifically music in this instance, which either references classic works of Horror, or borrows directly from the original source material, is safe. Like the promotional campaign for The Last House On The Left, it tells you “it’s only a movie, it’s only a movie.” Frequently, music that references classic Horror plays up the cartoonish aspect of it, and is not very frightening. Look at the garage camp of bands like The Cramps, as evidence of this.

But the music that places you inside of a Horror film or novel can be quite harrowing indeed; especially when it is not associated with any concrete imagery, like an alternate soundtrack for a movie. With nothing to anchor it, these visions take on a vague and spectral dread, filling the air with all manner of phantasmagoria, like some demented Edgar Allan Poe protagonist. The chills may be too subtle to pick up, for someone with little imagination, or without the patience to draw their own interpretations of this subjective art form. Most horror fanatics, however, have imagination in spades, and plenty of patience to absorb dark arts, in whatever medium they may come.

Spectre Music Of An Antiquary is the first new music from the excellent British dark ambient producer Emit, who has been working under the Hammemit moniker, in the meanwhile. I use the term “new music” loosely, here, as Spectre Music was originally released on cassette on Glorious North Productions, in 2012, but is getting a much appreciated re-release, on CD and Vinyl, on the notorious extreme music label Crucial Blast.

Emit, across both of his monikers, exemplifies everything we hold dear, here at Forestpunk: ritualistic folk music, raw black metal, blackened noise, horrorscore synths, and mysterious and murky coldwave and post-punk, sometimes within the same song. Emit proves, beyond a shadow of a doubt, that the hard and fast rules of scenes and genres are decaying, with these weird and abstract permutations being something entirely modern, yet without a name.

It is this unnamable quality which makes this music so effective, and so James-ian. M.R. James heroes were frequently scholars, (much like himself), who dared to go seeking the limits of logic, and fell off the map, into a world of shadows and terror – a world of madness, essentially. We recall that the specter in one of James’ most classic tales, “Oh Whistle And I’ll Come To You, My Lad,” is depicted as nothing more threatening than a bed sheet. It is the wondering, the uncanniness of things moving when they should not, of being where they shouldn’t be, that drives James’ heroes beyond their wits’ end. The mind is free to fill in the blank spaces with whatever it likes, whether they be angels or demons. It is the unknowing that causes the terror.

I think our attitudes may be shifting, however, which may play a part in why our aesthetics are changing. Because we live in a world where everything is immediately knowable, which leaves us starving for the unknown, longing for mystery. Perhaps this need for new frontiers to explore may outweigh the risks of falling off the map.

Horror has always served a confusing dichotomy. On one hand, it is a realm for people with morbid imaginations; while on the other, it directly serves the status quo, reminding us to not leave behind the lamplight of civilization, or we shall surely be killed, or worse. Horror serves as bloody morality tales, to keep the young fearful, to stop them from doing drugs or having premarital sex and ruining their lives. More than anything, it spells out, in giant invisible letters, “You need society. You are not safe.”

Imagine a world without imagination, however, a world with nothing to explore. We’d die out of terminal boredom in a generation. It also presupposes that everything is entirely perfect as it is, as good as it’s ever going to be. Anybody who reads a newspaper from anywhere in the globe can tell you that is not true. With the widespread access to information we have nowadays, it is plain to see that the idea of “civilization”, which too often gets used as a shorthand for “capitalism”, is a noble lie. Softness and convenience is too often at the expense of someone else. For every first world country, of which there are not many, there is a third world country in the dust, starving to death. Easy answers and morality tales have gone the way of the unicorn.

All of this is a lengthy way of saying we have to explore these dark and shadowy unknown realms, to try and cure ourselves. To risk the darkness, to find grace and hope. We have to risk the demons, to find the angels.

Most of the material on Spectre Music Of An Antiquary falls into the mysterious coldwave/post-punk variety, with simple but cavernous beats and chiming chorused electric guitar, like something off of a Cure or Felt record, being swathed in tormented vocals, reminding us of Emit’s black metal roots. They phrase it thus, on the press release, “mutated, primitive 80’s darkwave being completely taken over by malevolent spirits, with eerie electronic drones and distant moaning vocals often taking over.”

The album opens up with that chorus-drenched minor key guitar sound that is unmistakably Emit, eerie choral drift intertwining around the vaguely off-key melody of this short intro track “Haunter Of Benighted English Summers”, sounding dreamlike and hallucinatory and off from the start. That’s over pretty quickly, and then it completely shifts gears with the throbbing distorted synth and gated drums of “Mors Wher Devels Are Abrod”, an eerie melody woven around ghoulish vocals lost off in the background, that chiming, chorus-soaked guitar coming back in after a while; utterly weird, this sounds like some cross between something off Tangerine Dream’s score for Risky Business, a rack of keyboards lifted from John Carpenter’s Prince Of Darkness soundtrack, and a shambling low-fi basement black metal outfit, and the result is rather bewitching. Clanking industrial percussion, strange mechanical melodies and distant crooning blur together on “The Dusk Gardens Of Translucent Mansions”, continuing the bizarre dreamlike feel of the album, sounding like some inebriated death rock band wandering through a graveyard of broken clocks, and then that murky, soundtrack-like sound returns on “Shades Over The Mere”, with more distant Tangerine Dream-esque synths droning over heavy mechanical rhythms, those deranged vocals waaaaaay off in the distance, everything wrapped in a thick fog of tape hiss and low-fi corrosion, but still strangely pretty and haunting beneath all of the sonic slime. The rest of the songs are similarly delirious, “Sylvan Old Enchanter” drifting on waves of buried synth and deformed black metal guitar, washed out and bleary as it transforms into a wash of gorgeous organ-drift, like something out of a Hammer Horror film drenched in lysergic acid, followed by the ghostly ambience, strange melodic singing and plodding drums that almost sounds like a more stripped-down, minimal version of black psych weirdoes Yoga; that’s followed by “The Meadow Reapers (A Field Recording)”, which is pretty much just that, a stretch of minimal environmental sound flecked with strange nocturnal cries, mysterious rumblings, bits of ominous warbling synth and distant voices, everything slightly skewed and otherworldly.

The final track “Emanations From Beneath Far Hills, Beyond Far Moons”, though, is closer to the sort of weird black ambience heard on older Emit releases like The Dark Bleeding Gods and the excellent Abortions collection, a dimly lit, murky wash of metallic resonance, soft shimmery pulsations of cymbal-like reverberations, these sounds coalescing in the blackness into strange, chiming, half-formed melodies. After awhile, mysterious percussive sounds begin to appear and disappear, soft ghostly knockings that drift up like transmissions from beyond the grave as the track slowly fades into total and utter darkness.

The entire album is perfect, from start to finish, but the dark noisy ambiance of “Emanations From Beneath Far Hills, Beyond Far Moons,” is my personal favorite, and the most evocative of M.R. James’ work, that makes you feel as if you are exploring subterranean tunnels, in search of some lost manuscript. It is dank and ominous and utterly lightless. Truly disturbing stuff.

Any fan of death rock, post-punk, raw black metal, dark ambiance, or the writings of M.R. James, or ghost stories in general, while frankly gibber over this release. Very much worthy of yr time and attention on this, one of the darkest nights of the year.

Emit – Spectre Music of an Antiquary