On their 5th transmission, members of Bong, The Psychogeographical Commission, and Joseph Curwen rend the veil, transcending the human, seeking the absolute.

“Infinite space, deep within weightlessness, exists a silent moment, when you will meet yourself.”

Intones a woman’s voice, in the final seconds of Chonyid’s 5.

Chonyid is a veritable spookhouse supergroup, comprised of a number of talented British sound maguses. So what happens when you blend a doom merchant, a flaneur, and an antiquarian? Something surprising. Chonyid are much more than a sum of their parts.

What compels musicians from a wide variety of traditions – in this case stoner/doom metal (Bong), dark hauntological synthpop (The Psychogeographical Commission), and H. P. Lovecraft inspired dark ambient (Joseph Curwen) – and what do they sound like when they come together? What’s the common ground, and why do they call it Chonyid?

It’s a ball of mysteries – our favorite kind of music. We investigate further, to see what we might be getting into:

The ‘ritual ambient‘ tag on Bandcamp reveals the first clue. An interest in ritual is a commonality amongst doom, dark ambient, and nearly every kind of noisy/experimental music. So we may be right in assuming, off the bat, that this gathering is ritualistic in intent. It clues us into what kind of music we’re getting into, and what it’s possible motives might be.

5 is made up of two lengthy ambient soundworlds, each nearly half an hour long. The basic sound pallet is deep, ominous droning bass synths, temple bells, and throat singing, with distant beats and modified birds cries rising and falling out of the mist created by the sustained synthtones. The croaking chanting sounds like some lumpen and misshapen acolyte singing praises to his frog deity. The birds sound like avenging harpies, like napalm kamikazes.

Another tag on Bandcamp, another clue: sky burial. As a footnote, the one single line of text accompanying 5 is “The Vast and Stainless Sky of Absolute Nature”. Sky burial is a tibetan funerary practice, in which the deceased is left to decompose on a mountain top, to be dispersed among carrion birds, and spread back to the sky.

With the presence of temple bells and deep ritualistic horns, a Tibetan connection seems rather obvious.

To dig deeper, we search the name: Chonyid. Chonyid Bardo is a state of karmic illusion, “psychic residue of a previous incarnation,” according to this very excellent article from Carl Jung Depth Psychology. Even if we debate the existence or nature of souls, with things like past lives, karmic inheritances can be seen as genetic dispositions, “predisposition to disease, traits of character, special gifts, and so forth,” as Lewis Lafontaine puts it. 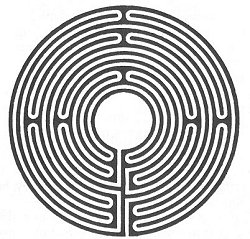 The walls of the labyrinth begin to manifest and make themselves clear.

Have you ever wondered what it is, to not be you?

Have you ever wondered what it takes, to be completely alone?

Ritual has always been a means to create a charged, heightened sense of reality. A state of excitement, so that your will may shape the threads of reality. Ritual is used to pierce the veil and sometimes, to summon other worlds.

5, and most ritualistic music, really, is rather interesting in that it serves as a ritual in itself, for the listener, creating this sense of a charged atmosphere, and it also serves as a spiritual realm in it’s self; like some spectral vision, caught on disc, etched into grooves. It’s its own self-contained sonic universe, and a very interesting one.

The feeling i get, with all the subtext and subterranean currents, is one of a body/person, left to be picked apart by the birds, after demise. This could be seen as all the little bits of humanity are discarded, one by one – all the little things that make you you. Yr childhood memories, yr loves – who are you without these things?

Chonyid seem to be both lamenting as well as searching for an escape hatch from our sensory prison; from all our conditioning, and all the puppet strings that society have installed, our insecurities and our storylines. Our damn solipsism, that keeps us all so alone, floating in the void, and an inability to perceive the whole picture.

What would the world look like, if you looked through a dog’s eyes?

This kind of ritualistic invocation is intriguing, in that, for a long, long time, it seemed that most music being made could be perceived as ‘egoic’: man vs. nature, or himself, those classic storylines. Beethoven’s music is the supreme quintessence of this, to me; a musical portrait of a great man, with a wide musical vocabulary, observing war, agriculture, and ultimately, his place in the universe and life and death. Here is the western idea of Genius, that we all worship, but are secretly wounded by, as well.

Then with technology, it seems that the music that was possible, that people started to make, started to have a different goal. You can definitely see, in the early electronics, as well as musique concrete, that “composers” became interested in making worlds of sound that people had never seen/heard before.

Rather than trying to tell a story of a person’s struggle or interaction with these environments, they became the environments themselves. The thing of it is, in listening to music like this, it raises this imagery inside the mind, and you begin to envision vast empty landscapes, or whatever the hell you think of when you hear of music like this. You begin to think of life outside of Humanity, which makes you question yr role in that web.

What’s interesting with Chonyid (apart from being a really excellent deep immersive drone record), is it shows how all of these disparate genres they work in have this thread running through them, this common interest. Alien worlds, outside of ourselves.

Musically, the band are in top form. I’m not too terribly familiar with Bong or The Psychogeographical Commission, but we write about Joseph Curwen a fair deal around here, and comparing these recordings with his solo material, 5 definitely sounds much richer and fuller, more acoustic, more authentic. A little less uncanny. I think Curwen’s work with bands like Chonyid and the Dead End Street Band is reflecting in his solo work, as well, as his recent material is starting to have a more live, raw and immediate feeling. It’s thrilling, and interesting, to watch and listen to this artist’s career unfold.

All in all, this is an excellent dark ambient record, mixed with a feeling of live folk ritual, that will rip the paint off the wall of yr apartment. You might want to draw a protective seal ahead of time.