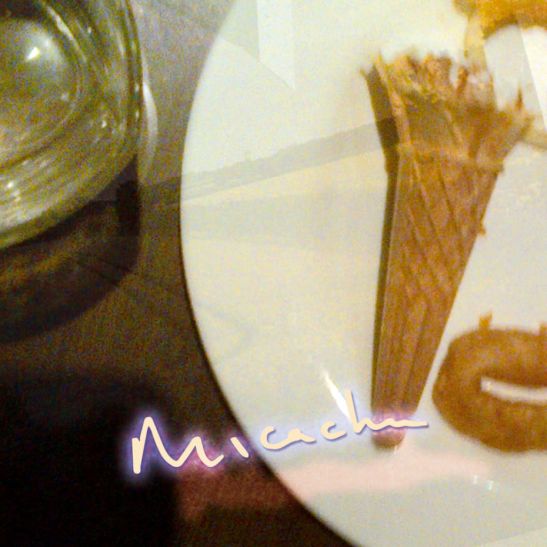 Mica Levi‘s idea of feeling romantic is a frightening thing: all discordant, squealing strings, and cocooning synthesizers. This is what it sounds like to make out in the shower at the Bates Motel, before being sucked down the drain to face Pennywise.

Mica Levi is not one to sit still. After coming to prominence with the jangling future pop of her main band, Micachu And The Shapes, she has gone on to reconfigure herself as a successful film composer, with her widely celebrated synth score for last year’s Under The Skin. Anyone only familiar with the vaguely hyperactive pop sculptures of Micachu would be very surprised indeed with these ominous synths and backwards strings stingers.

Relentlessly explorative, Levi did not call it quits there, going on to produce an array of DJ mixes and rough demos with Brother May on her SoundCloud, ultimately resulting in the most bizarre and unexpected move of them all: this one-hour mixtape on Demdike Stare‘s DDS label.

It’s quite a jump to go from the chirpy bounce of Micachu And The Shapes to the meisters of droning darkness, Demdike Stare. How are tUnE-yArDs like Twins Of Evil? Sounds like a zen riddle, doesn’t it.

When you listen to the pillowy synths and classic horrorscore ambiance of Under The Skin it begins to make sense, and doubly so, when you think about Canty & Whitaker’s penchant for releasing label-less mixtapes into the world. They love adding confusion.

Feeling Romantic Feeling Tropical Feeling III is one continuous track, nearly 60 minutes long, made up of three movements, respective of the three moods in the title. Thus the joke about feeling romantic, which is all hair-raising strings and bottom-dwelling ominousness, which makes us wonder what Levi does to get in the mood. The harrowing ceases pretty quick, with the introduction of some repeating ambient keyboard pads, and some diffracted, distant violins – not stabbing this time, but lulling. This is emotionally effecting music, but viewed from a distance.

The drones are interrupted for a moment of end boss battle footwork constructions, like a gothic, ornate Ruff Sqwad outtake, but it fades fast, pulling you back under, into an artificial respirator of looping harmonium and brillo-pad distortion. I’m not sure if i’m supposed to be feeling romantic or tropical, at this moment. If this is tropical, it’s an irradiated island, with radioactive piranhas swimming its shoals. And secret tunnels, leading to subterranean pump rooms.

The beat comes back, twenty minutes in, with solar bursts of airy organs, that sound wrenched from the ground. Again, this sounds like the backing track of a trap remix, minus 97% of the percussion. Again, it is quickly swallowed by radiophonic extrapolations, as Delia Derbyshire‘s corks are endlessly popped, while Z’ev beats a tattoo, on the other end of a wormhole.

Actually, that may have all been romance, as disembodied birds come chirping at 23 minutes. This has the same skewed and warped childhood TV theme song of the Ghost Box style of hauntology, which we can never get enough of. Maybe a theme for The Swiss Family Robinson, if they had a projector and a robot butler?

At 27 minutes, what sounds like a Micachu outtake comes creeping in, as heard through the wall and down a hallway. Just a dubbed-out outline of a guitar, and a bare, shuffling snare, like a deadpan drummer boy. It seems like it could go somewhere, be something more, and that is part of the joy of it, as it sounds quite ecstatic on its own, and is thrice as beguiling when the tape is cut, going back to weightless, ethereal noise.

Feeling III is as abstract as it looks. What do three vertical lines feel like, let alone sound like? Feeling III is a realm of beat mangling and clockwork handclaps; like a gangster rap epic, but with no hooks or MCs, like the tape had been half-erased. The structure falls to pieces, as Levi’s casio cymbals swallow the world. There’s more gorgeous guitar playing, more birds chirping. Feeling III is like Micachu’s entire musical history, condensed to 15 minutes. It’s weird and wondrous, poppy but experimental.

Feeling Romantic Feeling Tropical Feeling III could be seen as a short history of how to make a loop; from the razor-edged musique concrete of the GRM to the pedal pounding basement dwellers of the post-Animal Collective world. Loops are funny things, as they let solitary practitioners flesh out their sound, making for more intimate lo-fi flavors than merely loner folk, but there is the same isolation there, as well, the feeling of peeking in on someone else’s world. Like looking (or listening in), on someone’s bedroom. There is also an inherently hypnotic, trance-inducing quality to the loop, the audio equivalent of staring at a dream machine, that comes along with the dreamy, artpop territory.

If these are the quality of Levi’s outtakes and cut-ups, i cannot wait to see hear what she comes up with next! I was a fan of Micachu And The Shapes’ futurist tendencies, driving the pop song into new and unexpected galaxies, but also found it to be kind of hard-edged and grating, after so many listens.

Levi’s work since, with Under The Skin and this mix, have softened the corners and blurred the edges, coming across like a Polaroid put in the microwave for a minute. It’s subjective, confusing, unexpected, and beautiful. It bears a strong resemblance to the cloud-distortion of Dean Blunt and Inga Copeland, both together and separately, and hints at the halo that surrounds Ariel Pink.

It also goes to show that the hauntological current has not dissipated. It’s just mutating, as ever, as we drop our horror movie samples into new modulators, racks, and rigs. Hauntology is undead, so can never truly die.

Also major props to Demdike Stare, for recognizing a winner, when they hear it.

This is sold out, physically, at the source (of course), but can still be had, digitally, via Boomkat. I’m not sure how in the hell someone’s supposed to get their hands one of of Demdike’s physical tapes. Probably involves some demonic pact, no doubt. Still, it’d probably be worth it.

We are madly trying to feature as many of 2014’s noteworthy moments, across all media. Is there something you think more people should hear about, listen to, read, or see? Let us know in the comments, or drop us a line on FB or Twitter. Also, if anyone fancies doing a guest post, to rep for some of yr favorite art, drop us a line at j.forestpunk@gmail.com with ‘Guest Post’ in the subject line!