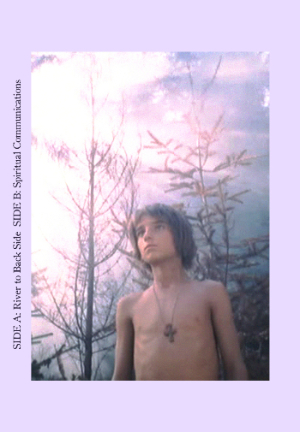 You step out onto the holodeck, heavy boots resonating on sheet metal, even though it looks like you’re walking through grass and weeds. There is a moment of cognitive dissonance, as you place down yr foot, expecting soft, squishy resistance, and meet cold, hard steel. This is life in the future, the illusion of lushness, when we’re actually marking time in a sensory deprivation holding cell, or perhaps being kept on a microdisk life support.

This debut cassette from Marco Bernacchia, who also makes music under the name Above The Tree, is an appropriate way to ring in the new year, as it summarizes many of the themes this blog seeks to illustrate: ancient modernism and the atavistic return, technology being used to re-create timeless pagan revelry.

Unconscious Cognition Is The Processing Of Cognition is made up of two sidelong drone scapes, comprised of ritualistic drum loops, gelatinous flangers and LFOs, melting throat singing, and hissing, sparking electrical arcs.

The album is themed after the Native American vision quest, “devoting their own lives to a new state of conscience, a vision often achieved through starvation and sleep deprivation which culminates in one trance state where real and unreal melt and define a symbolic message. Once decoded, the entire existence of the visionary will be lead according to this vision which often predicts the end as it shows the way,” as the press release puts it.

The A-side, “River to Back Side”, acts as an initiation, calling the faithful to prayer in hidden forest groves, creating a sacred space for visions to unfurl. Tribal voices meet a ferric drum circle, as viewed from 1000 years hence.

“SpiritualCommunications”, the B-side, serves as the revelation, after contact has been made. Wisdom from the land of the dead, in the form of a low, droning hum, and strobing electronics, to get the trance going, loud. The ancestors speak in degraded chiptune vocals, like prophecy from a Saturday morning cartoon. A liquid bass beat eventually introduces itself, along with the call of a shaman. Sounds stack and build, to a quiet intensity, which finally breaks in a puff of charcoal and glitter, bringing you back to the beginning, to begin again.

So what does Virtual Forest say about the world we’re living in, and what does it have to do with the Forestpunk concept?

Virtual Forest employ a battery of technology, both retro and cutting edge, to create a feeling of ancestral worship and ritualism, making it both futuristic as well as atavistic. For the longest time, electronic music was only looking forward, and the only nod to ancient cultures was in the form of poorly integrated, exploitative world music samples, like the “pygmies” from the first Deep Forest record.

But here we have electronics being used AS the ritual, serving as a solitary drum circle, in a way that wouldn’t have been possible, before the advent of multi-track recording.

Secondly, Virtual Forest pushes us out towards the REAL, the actual forests and clearings and ritualism and prayer, rather than trying to simulate or recreate, in a similar way that seeing a bunch of abandoned UrbEx pictures on Tumblr will lead one into psychogeography, into exploring the actual environment they live in.

There once was a feeling that technology was going to solve all of our problems, that fancy blinking LEDs would make us brilliant artists, without putting in the work, and constant interconnectedness would alleviate our isolation and make us aware of everything.

After 18 years of an online presence, i’m only aware of how much i don’t know, and how much further i have to go, to be brilliant.

There are no shortcuts, no magick devices.

But futurism, blended with tradition, is where things get interesting.

It seemed like, in the 20th century, the movement was to rip it up and start again, to throw out all the rulebooks, to destroy every tradition, and start over, tabula rasa.

This may have been a case of babies and bathwater, as a lot of 20th century music ditched concepts of harmony and melody, and other things that make up “good music”, as they were seen as conventions towards pop.

I can tell you, after a decade and a half of listening to free jazz and noise records, that this is not always a good idea, and we begin to miss musicality, expression, beauty.

Forestpunk represents a third way – a synthesis, an alchemy. An INTEGRATION of technology, into our lives, to make things easier and better, as we see fit.

But we still have to do the work. We have to find out what we are trying to say, so as to know how to say it best.

From the other side of the mirror, we can use every tool at our disposal to create the worlds inside of our heads, to the best of our ability.

It’s a language of contradictions: something intimate and personal, but connected to everybody. Glittering, gleaming futurism meets the wild, the abandoned and free.

The future does not need to be sterile. Technology does not necessarily mean soulless.

It’s all right here. Waiting for us. To make the most of it, to dream the world into being, and maybe correct some of the missteps and mistakes of history.

Recommended for fans of the recent strains of Italian Occult Psychedelia, if they were to sample off of nature documentaries instead of horror films.

Unconscious Cognition Is The Processing Of Cognition can be streamed, in full, at the Italian website Sentireas Coltare.

Get a copy at Yerevan Tapes’ big cartel shop.