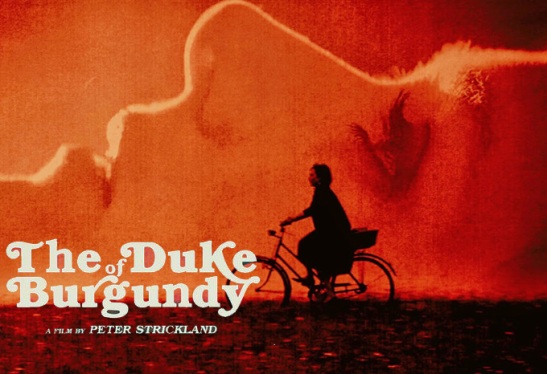 Cat’s Eyes score for Peter Strickland’s The Duke Of Burgundy is pure psychotropic orchestral pop grandeur, that will put fans of Broadcast and Stereolab into paroxysms of pleasure!

The Duke Of Burgundy was billed as an “arthouse counteroffensive to 50 Shades Of Grey.” It follows the cloistered, idyllic lives of Evelyn, a waifish submissive, and Cynthia, her poised and elegant mistress. The two play out ritualized games of service and punishment, punctuated by Cat’s Eyes woozy harpsichords, creaking and mysterious woodwinds, and effortless ethereal vocals.

Cat’s Eyes are the duo of Horrors singer Faris Badwan and Italian-Canadian soprano Rachel Zeffira, who normally play a kind of dreamy, reverb-laden garage fuzz pop, like listening to Nuggets from half a mile a way. That’s part of what makes this record such a surprise and a delight. It’s not to suggest that musicians of a pop pedigree are incapable of classical beauty, but they frequently aren’t bothered to try.

The lion’s shared of Cat’s Eyes score is made up of short, orchestral cues, of sonorous cello, and cranking, creaking bassoon and sidewinding clarinet, all of which serve to accentuate the opulent ritualism of the scenery. It could be the Icelandic Philharmonic, under the direction of Pierre Boulet, such is the quality, the richness, the fidelity.

The score is less bombastic, less symphonic than that, however, sounding more like a close-mic’ed chamber ensembled. I was reminded of some of Philip Glasses’ scores for Dracula and Beauty And The Beast, with that kind of spiralling minimalism, that builds the passion and intensity like a quicksilver corkscrew helix unto God, as well as Max Richter’s masterful The Blue Notebooks, which is one of my favorite pieces of elegant, restrained ambient classicism. This light and airy chamber ensemble is paired with the rough and rustic surface texturex of creaking wooden instruments, that reminds me of the classical menace of Kreng, so if you like any of those things, and would like to hear them together, here’s your chance.

The Duke Of Burgundy was directed by Peter Strickland, best known for the wonderful Berberian Sound Studio. Like Berberian, sound design is super influential both to the movie, and the soundtrack, with the orchestral beauty interspersed periodically with dreamy snippets of dialogue and the amplified sounds of moth wings and insect schirrups, which are a re-occuring theme throughout the movie.

I had originally intended to write about this soundtrack before i had seen the film, but i’m glad i waited. H. and i had the opportunity to see The Duke Of Burgundy at Portland’s temple to cinema, The Hollywood Theater, on Friday The 13th, to boot. I already dug the bloody hell out of the tunes, but seeing it loud and in your face on the big screen drilled the themes into my bones, and now, when i listen to its careening, drifting lull, (which i do often), Strickland’s chthonic kaleidoscope of autumnal forests and moth wing montages dance across my eyelids.

Not only is this masterful, classical orchestral music, it’s also damn good sountrack music. Badwan and Zeffira utilize classic techniques, like repetitive themes for each character, to give a continuity to the film, as well as providing insight into the character’s depths and inner states, as the best film music does. They also synchronized the sounds with the action on-screen, with harps and harpsichords seeming to tick along like a polished brass clock in Cynthia’s study of wonders.

I cannot recommend the soundtrack or the film highly enough. It casts an insightful gaze at the power dynamics of relationships, leading us to question who is the master, who is really in control. Evelyn, as a character, seems totally lost in a world of color and sensation, which is beautifully mirrored by Cat’s Eyes music. It was always refreshing and interesting to take a deep gaze at a relationship between two women, without fetishizing them, just showing them as two people, as deeply conflicted and complex as anyone. (These two women are particularly complex, but seem to genuinely love one another.)

For those of us who have burned out our Stereolab and Broadcast, Casket Girls and Julee Cruise LPs, here’s a fresh strawberry breeze for yr garden.

One comment on “Horrorscores: Cat’s Eyes – The Duke Of Burgundy OST”