The air was thick with adrenalized expectation as Dean Lemire stomped the pipe organ’s bass pedals, conjuring a wall of velvet-smooth sub-bass, as a wind-blown pipe organ sounded for the first time in 88 years at this special screening of 1927’s The Cat and the Canary. Read our movie review and live performance notes to find out more!

Paul Leni‘s take on The Old Dark House genre is a masterpiece of expressionist camera angles and early cinematic innovations. A fresh organ score from Dean Lemire of the Columbia River Theater Organ Society at Portland’s Hollywood Theatre offered the opportunity to see the film in a fresh new light.

Autumn is here. Here in the Northern Hemisphere, the trees are burning, all scarlet and marigold, preparing for their yearly nap. The breeze is warm as honey but chilled as fresh apples, cooling off the summer’s wildfire hellscape. The windows are slitted, the drapes dancing like phantasmal ballerinas, while we pull out our cable knit sweaters and prepare to hunker in for the coming dark.

Early autumn is the perfect time to explore The Old Dark House/Haunted House films. The Cat and the Canary is a fine place to start, as an early (and exquisite) example of the genre. The ghostly, mouldering gothic mystery, with long corridors full of billowing drapery, seem right at home at the turning of the seasons.

“The Creepiest, Spookiest Mystery Melodrama Ever Made.”

The Cat and the Canary begins with a bit of exposition, laying the groundwork for the film to come. The film revolves around the reading of the Last Will and Testament of Cyrus West, an eccentric millionaire driven to madness by greedy relatives. West’s will is sealed for 20 years following his death. The Cat and the Canary finds West’s descendants gathering together to see who will be Cyrus West’s heir. 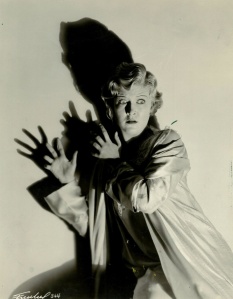 The catch? (There’s always a catch with these mysterious wills.) Cyrus West’s heir will have to be proven mentally-sound to receive their inheritance. Thus the game of Cat and Canary begins, as ominous, terrifying things begin to happen around the rambling, gothic manor, revolving around Annabelle West (Laura La Plante), a wide-eyed innocent named as Cyrus West’s heirs behind closed doors. Annabelle is informed an unknown recipient will be named heir in her stead should she be found mentally ill. Cyrus West’s attorney, Mr. Crosby (Tully Marshall), is about to name her competition only to be pulled into one of the house’s many hidden passageways by a malevolent hairy hand, unbeknownst to Annabelle.

Annabelle’s sanity is called into question from dead bang, which is only exacerbated by the appearance of a guard from a local sanitarium, informing the guests there of an escaped maniac, “The Cat,” a bug-eyed, buck-toothed mass murderer.

The games are fully afoot, as everyone is called into question, including Annabelle herself. Who is insane? Who is dangerous? Where is Mr. Crosby? Who was named in the secret, second envelope in his pocket? And where, finally, are the famous West jewels?

These are the questions begging to be answered as Paul Leni’s masterpiece builds towards its fiery crescendo.

The ending is a little bit Hitchcock, a little bit Scooby-Doo, and a little bit saccharine romance as Paul Jones, the lovable, oafish relative played by Creighton Hale for comedic relief, steps forward to deliver Annabelle from her tormentors. 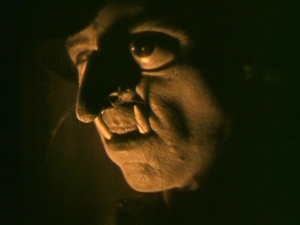 Laura La Plante delivers a stellar performance, innocent and vulnerable but with enough steel and grit to survive. She seems pure-hearted and good compared to the scheming, manipulative relatives. Not only is La Plante’s performance a career highlight, it’s also a standout of the Silent Era. Many films of the 1920s – especially those adapted from stage plays, as The Cat and the Canary is, based on the stage play by John Willard – succumbed to an overblown, over-dramatic style, as actors learned to translate their craft to the intimacy of the film camera.

The Cat and the Canary takes full advantage of its cameras, including numerous ambitious tracking shots exploring the moody interiors of Cyrus West’s estate. The innovative camera work, combined with stunning production details such as inky black low-key lighting, montage, and some of the most stunning title cards you’ll ever see, make The Cat and the Canary one of the best introductions to Silent Film, in general, and Silent Horror specifically. It is fresh and inspiring nearly 100 years later, thanks to these innovative production details and a masterful blending of numerous genres.

Time became a flat circle at this rare live screening at Portland’s Hollywood Theatre, as the past caught up with the present thanks to a recently-finished renovation of Beverly Ruth Nelson pipe organ. The theatre just put the finishing touches on the first bank of pipes, hidden behind the main theatre’s vaunted walls. This screening of The Cat and the Canary offered the first blast of wind-blown pipes for the first time in 88 years, supplied by the “rock star of the pipe organ” Dean Lemire. Not only was Lemire’s performance spot-on and impeccable, never missing a beat as he churned out a mini-orchestra from the pipe organ, but he also composed the music himself. Masterful music performed by a Master Organist – these are rare moments, to be seized and cherished when possible. Masterful performance such as this were probably rare enough in 1927 when The Cat and the Canary was first released, as Dean Lemire truly is one of the best, but it’s down-right unheard of in 2018.

The Cat and the Canary was the most recent installment of the Hollywood Theatre’s Pipe Organ Pictures series. We’re huge fans of alternate soundtracks here at Forestpunk, which you no doubt know, and organ scores are an early, iconic example of such a thing. It’s enthralling to imagine a world where theatre organists would compose their own music for a film, probably over and over again. These pocket composers were like the choirmasters of the Early Cinema, the Bachs of the Box Office. Their love of both music and film must’ve been legendary. It’s beyond inspiring to see that level of commitment still existing, even thriving, as theater lovers donate their time and skills to rebuild the Hollywood Theatre’s pipe organ infrastructure. It’s just one more example of Portland’s vibrant film community, passionately embracing everything from historical cinema to the avant-garde, arthouse, indie, and second-run. Trash and treasure alike splay across silver screens almost daily, across a handful of excellent movie palaces like the Hollywood Theatre.

It was our distinct pleasure to get out and support the Columbia River Theater Organ Society on a golden September Saturday afternoon. If you’d like to help see more organ performances and alternate soundtracks in and around Portland. For more information on how you can support the CRTOS, including becoming a member which gets you free admission to all CRTOS performances, contact them at info@crtos.org.

The next installment of Pipe Organ Pictures will be the 1925 silent version of The Phantom Of The Opera at 2 p.m. October 27. You can find tickets here!

Got something horror-related in or around Portland or the greater Pacific Northwest? Get in touch if you’d like us to help spread the word!