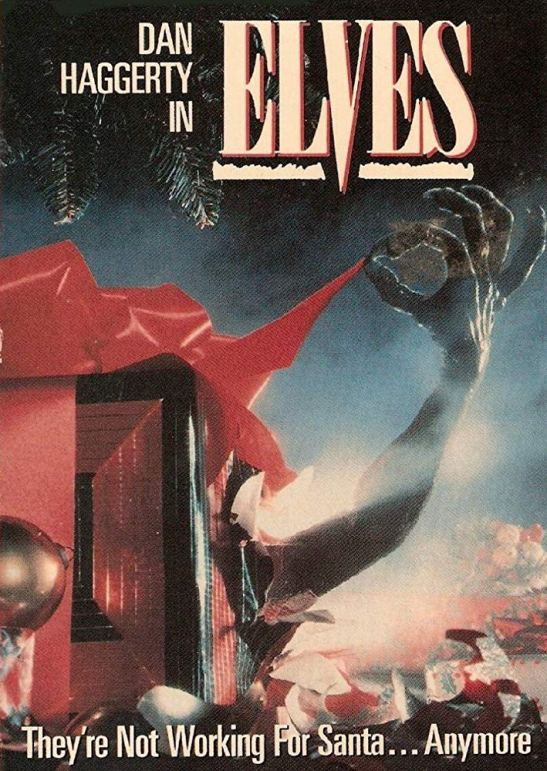 This campy, bizarro Holiday Horror starts as a respectable Christmas creature feature/slasher, and then goes off the rails like some demented sleigh ride on DMT.

It’s a few days before Christmas. The “Sisters of anti-Christmas” convene in a forest clearing to perform a ritual. Kirsten, played by Julie Austin, cuts her hand and an unspeakable evil is summoned from the Earth.

This premise could have been a nice set-up for a perfectly adequate low-budget Holiday Horror, but director Jeffrey Mandel had other ideas. All of them, it seems, with new plots, characters, sub-plots, developments, wackiness, and enough nastiness to keep you going, making this lump of coal kind of a diamond, in its way.

We’ll discuss some of the finer points of 1989’s Elves, speak to its drag late-80s charm, and weigh in with the results.

Kicking off a week of Dark Christmas with an Elves movie review! 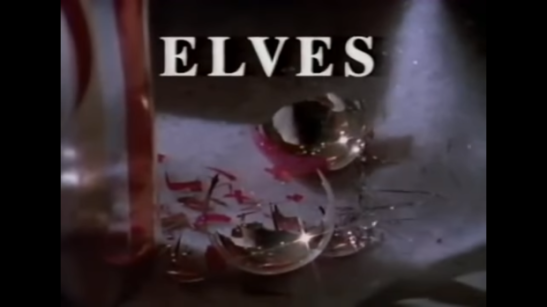 Kirsten is busted from her late-night conjurations while returning her grandfather with a conspicuous German accent, played by Borah Silver. “Were you out in the Woods?” Grandfather wants to know. Something is clearly up…

Kirsten goes to change, only to get peeped on by her foul-mouthed younger brother, with the most 80s bedroom in history. Sadly, this is just a drop in this film’s incestuous bucket, but more on that in a minute.

The evil elf – and really, this film should be called Elf as there’s just one – is already wreaking havoc. It follows Kirsten to her job working at the snack bar at a local department store, Golem’s. Kirsten gets perved on by a lecherous Santa during her break, who she gets in trouble. Santa goes to the backroom to take the edge off with a blizzard of cocaine, and the elf claims his first victim.

This opens the door for Mike McGavin, TV’s Grizzly Adams, to take the job as the department store Santa. McGavin’s a down-on-his-luck ex-cop, who drank his way out of being “the best detective this force has ever seen.” McGavin cleaned his act up, but he’s still dealing with the fallout. He gets evicted from his trailer, forcing him to camp out in the department store, eating stale donuts, chain-smoking, and reading his A.A. Big Book. 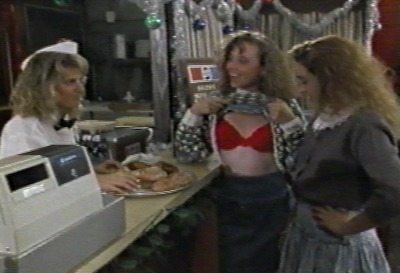 “The Sisters of Anti-Christmas”

Kirsten and her friends also have plans to crash the department store. They’ve invited a bunch of boys to mess around in the camping section, and proceed to pillage Golem’s lingerie department.

It’s not only the evil elf that’s following Kirsten at this point, however. Some of Grandpa’s former co-workers are also keenly interested in Kirsten.

We’re going to discuss some of the finer points of Elves from this point forward, going into some of the truly left-field developments that make this film such a lysergic sleighride. If you don’t want any spoilers, stop reading now, and go watch 1989’s Elves, if you’re looking for some obscure, weird Christmas Horror!

Turns out Grandpa used to be a Nazi. The Nazis were interested in Elves, along with a host of other occult preoccupations, intending to create a race of supersoldiers. They just needed a pure Aryan lineage to produce the Elf/Human hybrid, which would become The Antichrist.

To this end, and in one of Elves’ craziest reveals, Grandpa impregnated his own daughter! Grandpa is also Kirsten’s father! Explains why Kirsten’s mom, played by Deanna Lund from TV’s Land Of The Giants, hates her so much.

A shoot-out in the department store commences, while the elf also continues to wreak havoc. Kirsten’s friends are killed, as are the boys they invited. The police come in to assess the damage. McGavin, thanks to his former life as a detective, is given 24 hours to try and crack the case.

A truly fun series of visits to college libraries and invading professor’s homes on Christmas Eve commences, in a way that would never happen in the age of smartphones. You get to see Grizzly Adams cruising in a beat-up 70s Chevy Impala, racing against the clock to save the day.

Suffice it to say, the day is saved, which is unsurprising in a movie. Kirsten returns to the forest clearing where it all began with an “elfstone,” that looks conspicuously like The Shard from The Dark Crystal.

The image of a fetus in the womb over the end credits suggests it might not be a happy ending, after all. 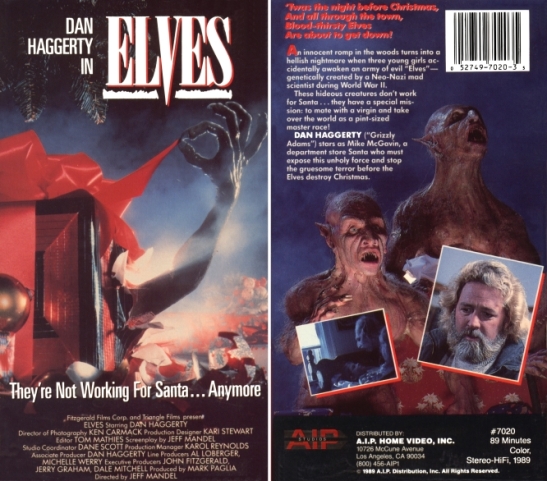 The Shabby ’80s Charm Of Elves

This is a less button-up world than the one we’re living in. Teenagers can easily break into a store at night only using a little masking tape. Mike McGavin is also given a job, on the spot, after the old Santa is murdered. There are no background checks, no references, no resumes.

Kirsten’s friends, the Sisters Of Anti-Christmas, are the heigh of 80s parody, yielding such dialogue nuggets as this, while discussing Brooke’s choice in lingerie:

While this late-80s world was still hard and cruel, with people getting fired and evicted on Christmas Eve, it still seemed possible for the down-and-out to flourish a little more easily than current times. Mike McGavin carries around a carton of cigarettes throughout the film and is still able to drive. Poor people nowadays are up against much steeper pressures, even if there are also a lot more resources and knowledge available.

Finally, Elves gives us a glimpse into childhood and adolescence in the late ’80s. Kirsten’s brother, Willy, has the most 80s bedroom of all time. He wears Teenage Mutant Ninja Turtles pajamas and has a Ghostbusters 2 poster on his wall. He’s also a foul-mouthed little pervert, to use Kirsten’s own words. He spies on his sister while she’s changing and talks about “evil fucking Ninja trolls”!!!

I remember being like this, in such a goddam hurry to grow up. You’d mimic the cooler, older kids, even if you didn’t even know what you were saying. While i have limited experience and exposure, and this isn’t intended as a “kids these days” comment, unless you extend that to include anyone under 30. And that’s kind of the point. Current research has extended the period of adolescence up to 25, at this point. It seems that people are holding onto youth and childhood in a way that we just didn’t, even one generation back.

My early adulthood years were more like something out of the old Roseanne (the Darlene and David chapter), scraping out a barebones existence in a shitty blue-collar apartment, working two jobs for minimum wage. And while they make up a large percentage of my friend group and peers, at this point, it still strikes me as interesting to see people pushing 30 who are still racing to catch Pokemon and jumping on every social trend Instagram can cough up.

There is no judgement here, no shame, no shade. If anything, I’m jealous of my young associates and their extended, protected upbringing. I was taught the world was cold, hard, cruel. That monsters roam on Christmas, that you could be tossed out on your ear, even on Christmas Eve.

There was a wild freedom during these times, as well. No one was watching. No one was paying attention. No one cared. You were free to roam in circles to your little heart’s content, which is good, cuz there was nothing else to do.

A lot of Elves’ cast is made up on non-actors, with this as their only appearance. It gives the film a slice-of-life quality that is delicious and interesting, especially if you lived during these drab times.

I watched a VHSRip of this movie, complete with tracking errors and plenty of wow-and-flutter, and the time travel was complete. If you’re looking to experience a little late ’80s Christmas magick, this holiday season, check out Elves, especially if you’ve already burned out all the other Christmas horror classics.

This is Day 2 of Dark Christmas week. We started yesterday talking about O. Henry’s The Gift Of The Magi over on the new blog, Mastering Modernity.

We’ll be posting dark Christmas-related content each day until 12.25! We’ll be weighing in on some other classic Christmas horror films, TV specials, and media. There will be mixes, ephemera, and ghost stories for Christmas, as well! Make sure to check back often! Any help spreading the word is also greatly appreciated, if you wanna make this Holiday Season a little darker and weirder.

Got something horror-related in or around Portland or the greater Pacific Northwest? Get in touch if you’d like us to help spread the word!

Also, a heads up, we’re expanding in the new year! We’ll be delving into a lot more horror-related content, including movie reviews, books, comics, etc. Getting 2 other blogs going in earnest, as well, Bitstar, and Mastering Modernity for music, art, graphic design, visual culture, interesting facts, and history, towards the goal of exploring this world and its cultures as fully as possible! Not only are we striving to make sense of this confusing, complicated times, we’ll be giving you the tools you need to not only survive but thrive in these tumultous times!

Follow along, let us know what you think, and any horror movies, music, books, comics, art, graphic design, or physical products you’d like us to share!