Sunday Afternoon Movie: In the Shadow of the Sun (Derek Jarman, 1981)

Derek Jarman’s In the Shadow of the Sun is part home movie, part fever dream; a fantasy and a reverie and a technicolour nightmare, made more surreal, menacing, and beautiful with an electronic soundtrack by Throbbing Gristle.

A  shadowed figure bends down to photograph an indistinct shape on the ground, against a grim industrial backdrop. They are soon joined by another. They are dreaming of the countryside. Cut to fingers on a typewriter. Dissolve to a forest floor in time-lapsed decay, withering and erupting into flame. Primitive oscillators, atonal slide guitar, aimless vibraphone unsettle, pull the rug out from under yr feet, make the ground go soft. What is going on here? Are we in danger? In paradise? Is this a dream? A memory?

Derek Jarman’s In the Shadow of the Sun isn’t forthcoming with any easy answers. Or any answers at all, really. In the Shadow of the Sun is comprised entirely of home videos of Jarman’s friends shot between 1972 and 1974 superimposed with footage of a car trip to Avebury from 1980. Both were shot on Super 8, hand-colored, and then converted into 16mm. These ghostly pastoral images run throughout nearly the entire film, contrasting with the human figures, who are often masked and robed. The human action is murky, indistinct. It’s hard to tell what they’re doing, but the proliferation of prone figures, unmoving on the ground, and the occasional appearance of blood give the actors a slightly ominous air. The presence of blood is often one of the first signs that you’re watching a horror movie. The suggestion of violence, mixed with the eerie atmosphere of Throbbing Gristle‘s electronic soundtrack (which i’m including in the guidebook of the best Dark Ambient albums i’ve been working on the past few years),  make us wonder if the superimpositions are the fevered imaginings of some Thrill Kill Kult. Or maybe it’s the other way around, with the ultraviolence being the manifestations of a sun-stricken imagination, crumbling in on itself due to exposure to the elements.

Derek Jarman’s In the Shadow of the Sun isn’t forthcoming with any easy answers. Or any answers at all, really.

Or maybe it’s all just imagination, as suggested by the fingers on the typewriter. Maybe this is all some Leautremont-like transgressive surreality? William S. Burroughs writing a landscape novel? 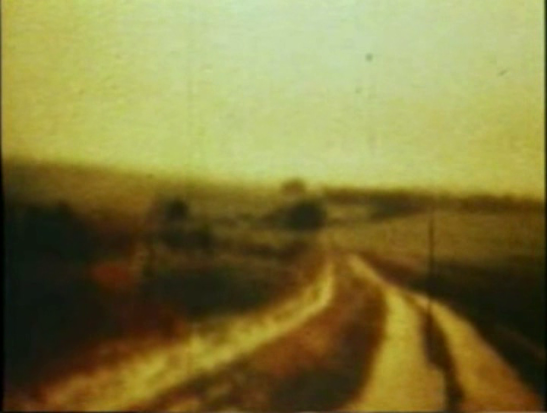 How much you enjoy In The Shadow of the Sun – or take away anything at all, really – depends on how much you need your cinema to make sense. If you’re looking for a concrete narrative or plot, you’d probably be better off watching literally anything else. But if you’re open to some dream logic, some cinematic poetry, or just to view an interesting installation in the history of avant-garde cinema, In The Shadow Of The Sun is very much worth an hour of your time.

Our purpose for posting In the Shadow of the Sun is threefold. First and foremost, we’ve somewhat recently revived the Sunday Afternoon Movie series on Forestpunk. If you’re past a certain age, there’s a good chance you might remember when local TV stations would broadcast old movies on Sundays, which were often quite obscure and sometimes rather unsettling. I, for one, remember seeing Dario Argento‘s Phenomena on TV in broad daylight one sunny Sunday afternoon when i was maybe 8 tops. Seeing a young Jennifer Connelly get dunked into a charnel pit of writhing maggots and decomposing bodies at such a tender age with zero warning or context made quite the impression, let me assure you. And, yes, it’s probably irresponsible to let such young children see such atrocities but it is what it is, and it helped make me the architect of the macabre that i am today. So the Sunday Afternoon Movies are in the spirit of those strange, sometimes trashy, often wonderful films. Just a little dose of magick and madness in yr day, which is the real inspiration and motivation for most of Forestpunk to be honest.

The second reason for posting In the Shadow of the Sun, and even more pertinently is, as you most likely know, on March 14, 2020, we lost one of industrial musick’s stangest, brightest, and most magickal lights with the passing of Genesis P-Orridge. Genesis, Throbbing Gristle, Peter Christopherson, and Coil are every bit as responsible for making me the digital druid, the arthouse witch and avant-garde sorcerer that you all have come to know as those surreal Sunday movies. I’ve been working on a series of memorials and investigations of Genesis’ life and works behind the scenes since his/her passing, so stay tuned for more investigation into their prolific and prodigious career in the coming weeks and months.

Thirdly and finally, my reason for posting is to call upon yr collective expertise. I’m doing some digging on my side of things, but what are some other movies with a similar look or feeling to In the Shadow of the Sun? Am finding myself fascinated and enthralled by the burned-out, nearly kaleidoscopic look of the 16mm film and don’t entirely know how to search for similar things. It reminds me of the degraded physicality of Stan Brakhage or Harry Smith; the surreal dream logic of David Lynch; the cinematic paintings of Carolee Schneemann. Will be digging deeper but thought i’d call on yr collective expertise, as well, as there’s bound to be some avant-garde film lovers among Forestpunk’s readers.

So, what are some other movies similar to In the Shadow of the Sun? And, secondarily, what other movies would you like to see included on the Sunday Afternoon Movie series? There are no limits, no restrictions. Anything from old dinosaur movies to sci-fi serials to avant-garde short films, home movies, obscure (or not so obscure) documentaries… whatever! Let us know and we’ll try and cover as many as possible in upcoming editions.

Want to support independent journalism and criticism? Every donation allows us to further spread our magickal mission!