You’d think that being slashed and stabbed over a stack of fresh waffles would be the most horrifying aspect of a movie that’s not even 11 minutes long. That’s truly just the syrup on the belgians in the sad, sordid world of Waffle, which is barely even satire at this point, which is part of why it’s so scary. 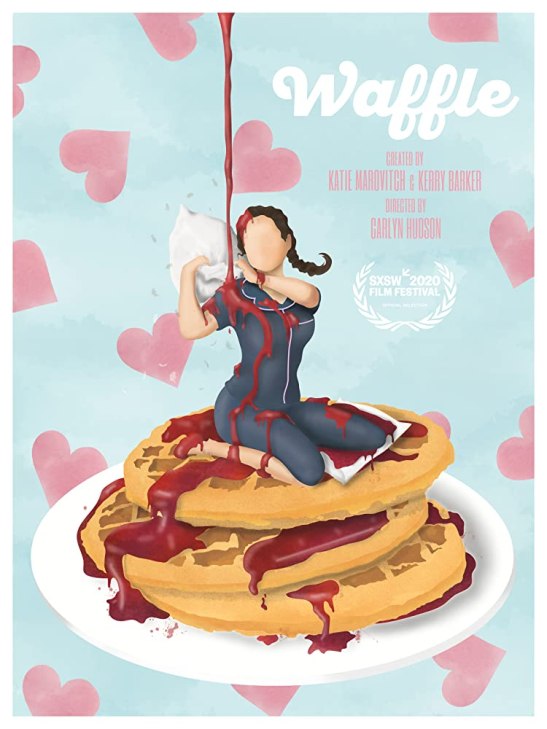 Waffle starts off with two young women having a sleepover – Kerry (Kerry Barker) and Katie (Katie Marovitch). Katie and Kerry are in that amorphous stage of life that is ‘young adulthood,’ where they don’t seem out of place wearing PJs and talking about cute boys OR swigging a bottle of wine. It’s a strange time of life for all of us, to be sure. We quickly get the sense that there’s more strangeness going on here than an awkward transitional phase.

We catch a glimpse of the real score when Kerry’s alarm goes off, alerting the pair their time is up. It turns out Kerry works for a friends-for-hire, a sort-of Uber for companionship. Gives a new meaning to postMates, doesn’t it? Katie, an affluent heiress to a waffle fortune, is used to getting what she wants. She refills Kerry’s coffers, who is obliged to call off a ride from her boyfriend Raphael (Raphael Chestang).

Katie’s got other ideas, though. She plans on keeping Kerry as a permanent playmate, along the lines of the Grady Twins in The Shining. A harrowing climax ensues, with Katie escaping by the skin of her knuckles. That’s not the real gutpunch of Waffle, however. You’ll have to watch this wonderful short film for yrself for that final revelation.

Waffle is a surprise and a delight of a short film. It’s got enough twists and turns in its short runtime to give you whiplash and leave you looking over yr shoulder, questioning yr entire reality. Waffle is billed as a horror-comedy, and that’s apt, but the chills rather outweigh the chuckles, although there are plenty of those, as well. And while Katie’s entitled affluenza psychosis is truly terrifying, the true horror of Waffle is on more of an existential level – the horror of a society where everything’s for sale, everything’s a commodity. At this point, it’s hard to tell if its a dystopian satire or if director Carlyn Hudson is merely pointing out the obvious.

To pack so many thoughts and feelings into ten minutes and forty-eighty seconds is worthy of a write-up alone. The filmmakers have accomplished something truly unique and praise-worthy with this short film. Much of that is due to the cast and crew’s ability to inhabit the film. Waffle was actually written by its two main stars, Katie Marovitch and Kerry Barker, which was then captured and stunningly brought to life by the sharp directorial eye of Carlyn Hudson.

Perhaps it’s due to their familiarity with the source material, but these two ladies really nail their performances, bringing their characters to life and hinting at hidden depths and their lives outside of the 11-minute frame. Which is something, in my opinion, that is essential for short-format media to truly excel. These performances are captured and brought to life to hint at some of the instability underlying the scenes, most notably wonky, out-of-whack camera angles that would do Terry Gilliam proud capturing Katie’s Single White Female-level psychosis.

Waffle is also noteworthy in its execution. Nothing feels homespun, amateur, or lo-fi in this gem of a short film. Cinematography is bright, bold, crisp, with colours that could reach out and cut you without seeming too 4K HD. It’s a pro affair, from top to bottom, from start to finish. It’ll be a wonder to see what Carlyn Hudson, Kerry Barker, and Katie Marovitch get into next!!!!

Waffle is a part of the SXSW Short Film collection which is currently being hosted by Mailchimp. When the film and music festival got shelved in the early days of Covid-19/Coronavirus, they were one of the first to start exploring alternatives to get this art out there. And to make it available for free, for all to see, which is at least one good thing to come from this recent nastiness.

So stay locked and check back often –  and also keep an eye on my other newer blog Mastering Modernity, where i post movie and TV reviews as well. We’re working triple-time to try and cover as much of the amazing content that’s been issuing forth from all the corners of the globe, in the wake of this global catastrophe.

We’re also taking inspiration from all of these makers and creators, curators and dreamers, working hard to bring interesting, entertaining art and media to people in lockdown. They give so much, so we’re goin’ hard to give just as much! Hope to shed as much ink on as many movies, TV series, books, comics, and as much music as our mortal frames can withstand, and just a tiny bit more. So if there’s something you’d like to see featured on Forestpunk, for any reason, provided it doesn’t espouse hateful rhetoric, sing out now and let us know! We’ll try and get to as much of it as we can!

Want to support independent journalism and criticism? Every donation allows us to further spread our magickal mission!