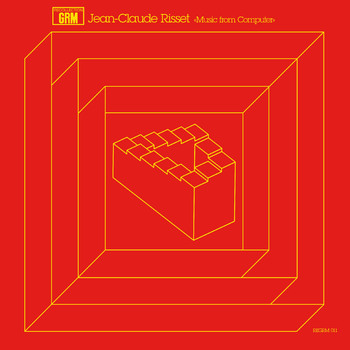 Music From Computer is an exquisite repackaging of influential works from early computer music Jean-Claude Risset, spanning the years 1968 – 1985. It illuminates a fascinating intersection between old-world classicism, musique concrete, and synthesis.

One always gets the feeling, with early electronic and tape music, of rigid uptight men in white labcoats. While you get a sense of that, with the music of Jean-Claude Risset, as you had to be technically minded to see a project like this through to completion, as electronic composition was such a laborious process in those days, with rendering sometimes taking as long as 2 weeks. Jean-Claude Risset, however, was not content to merely make some abstract, intellectual noise, but was also striving to make a thing of beauty, to build worlds; worlds that didn’t exist. And then make them exist. Sci-fi’s finest notion.

Not to generalize, but the French are particularly gifted at creating ornate beauty. They seem to have a joie de vivre for it. There’s a hint of Satie‘s delicate chamber music and Debussy‘s ornithology in the interplay of field recordings and computer tones, as intricate and lovely as a Brother’s Quay animation, or a Cornell box. While Music From Computer may be at times bejewelled, it can also be quite fierce. There are moments, like on the album opener “Sud (1985)”, when the composer zooms in on the rushing water sounds that predicts the HNW, all crackling line noise and surface texture. 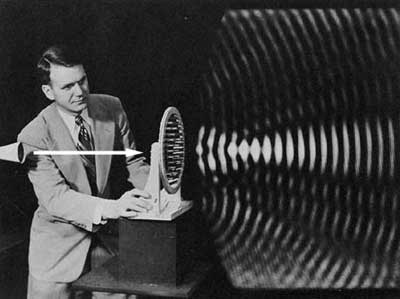 “Sud” is a monolith in 3 segments, clocking in at a staggering 23:43. The first segment comes clean, just bird and water sounds, recorded in the Massif des Calanques, south of Marseille, blended with computer tones, a la musique concrete. The overall sensation I was left with was some living medieval tapestry, in the back room of some forgotten tea room – all turqoise and teal peacocks, hummingbirds + waterfalls, shot through with mirror threads, like an incandescent kaleidoscope sky. “Sud” is like taking a flying journey across this landscape, sometimes zooming in for the macro view, sometimes taking the aerial oblique.

“Sud” was released in 1985, and it’s an interesting catalog of the studio effects available at the time. A lot of what goes on sounds like traditional tape manipulation, as there’s a lot of gloopy flange, ping-pong delays, and stereo panning. I have the suspicion that the computer was used to produce arbitrary tones, which were then interspersed with the tape manipulations, using traditional mixing methods. The computer mainly sticks to the traditional sci-fi tropes – detuned clusters of sound, swooshing oscillators and churning LFOs, and the highlight of Music From Computer is the clever and deft way these artifacts are woven together with the field recordings. It marks an interesting intersection of early digital music, sampling and musique concrete.

There is a purity about musique concrete, that recalls a time when the ony thing that mattered was furthering the musical mission. Finding something that had never been said before, and a new way of it saying it. Working within existing traditions, and then breaking the rules.

The rest of Music From Computer is more in a musical vein – there’s melodies and rhythm, with some examples of early drum machines. Its interesting that the earlier works, 1968’s “Computer Suite From Little Boy” and 1975’s “Mutations”, are more in the tradition of classical music, along the lines of when Moog synthesizers were starting to be introduced into symphonies, for their wacky tonalities. It seems that by 1985, it was becoming more possible to integrate the classical and the technological.

Music has always been about how we interact with the world around us – how it moves us, how we experience it. We have moved with the technology, transcribing the poetry of our lives through piano keyboards and saxophones. The interesting thing about the introduction of recording technology is that we no longer had to filter our memories through the language of music, but could begin to work with and reference the memories themselves. As studio processing and electronic music have advanced, it become possible to produce artificial memories and imaginary worlds. These two things would have a huge impact on our psychology, as Human Beings, and how we make art.

While Music From Computer may have been rendered as an interesting academic treatise, it seems these recordings were presented as classic headtrip records, equal parts Hi-Fi Test Record, Expo ’70 pavilion, and side A of a Gong record.

Its important to remember pioneers like Jean-Claude Risset, to remember where we have come from, and to have a better idea of where we’re going.

You can sense the care, craft and patience that have gone into making these productions. The presence of the hand haunts every inch of their veneer.

In this, Editions Mego, and the Recollections GRM series are doing important work. Reminding us where we’ve come from, to better understand where we’re going.

Its fascinating to consider how far these Art Deco futurist timecapsules and radiophonic sonatas have come from their labcoat origins, spreading through the grimey fingers of crate diggers to land beneath the septum-pierced noses of Black Metal cognoscenti. Infiltrating the mass consciousness. Dreaming the future.

In that, Jean-Claude Risset has accomplished the ultimate musical mission: to stand the test of posterity, to be remembered. To influence.

Risset, Editions Mego, and all the early electronic pioneers, remind us to take care with what we make, to never stop innovating, to make something lovely. To watch and listen to the world around us, and then translate that into music.

In that, the march of progress stops for a moment, the future grinds to a halt. That we may know a moment’s peace, to pause, and rest, and dream.

Music From Computer is available on vinyl from Recollections GRM, with graphic design by Stephen O’ Malley, and mastered and cut by Rashad Becker, at Dubplates & Mastering, Berlin.

Get it while you can:

To Find Out More, check out this lecture from Paul Sheeky, about the history of electronic and tape music; part of a stunning, in-depth and masterful series, that also comes highly recommended.