Imagine: You are watching The Wizard Of Oz synched up with the Dark Side Of The Moon alternate soundtrack. When the EMS Synthesizer’s cyclonic sequencer of “On The Run” syncs up with Dorothy’s transportation, the fourth wall is broken – and you are sucked into a Virtual Oz, walking on RGB #39FF14 lawns towards a total digital enlightenment.

Too often, noise music approximates the sounds of sterile laboratories and mildewing factories – not surprising, considering it’s made with damaged machinery from mangled minds, ripped and shredded with late-capitalist angst and ennui. At this point, however, we’ve got around a century of additional associations, permutations, mental images and tonal techniques – to call upon different images, to cast a different scene.

Merzbow, aka Masami Akita might be the poster child for noise music of all stripes – from hnw to digital dub, to sound collage, plunderphonics, extreme metal, on and on. With one of the most impressive ouevres in all of recorded history, Merzbow serves as two fingers on the throat, letting us know the contemporary noise climate, and where those weather patterns may be shifting. Merzbow’s certainly no stranger to bleak, uncompromising, unchanging expanses of degraded digital dirt and decay, but HNW Aodron, one of Merzbow’s newest and second release for 2017 on Seattle’s Automation Records, illustrates Akita’s head’s in a very different place.

Rather than just being an hour of relentless static, like most HNW releases, Merzbow takes on the entire auditory spectrum – the full 40 Hz – 14 kHz range of human hearing (and most likely beyond) – to create sonic scenery of the Never Was. Here, bass frequencies become rolling hills, while white noise flitters like moon moths in a truly bizarre new Wonderland.

The first movement, “Ao Part 1” and “Ao Part 2”, brings to mind a summer garden, where trembling treble becomes an oscillating sprinkler, while lumpen basslines roll along like a wheelbarrow with flat tires. It’s downright refreshing – dare i say, almost warm and tranquil – especially due to the exquisite mastering, gently rounding out the frequency extremes – making it easier to float along, like a lazy river, relaxing and dreaming.

Of course, it’s not all idyll, as Aodron builds in mechanical intensity as the album proceeds. The laboratories are back, starting with “Ao Part 3”, into the monolithic “Tetsu TO”, another album highlight, sounding somewhat like what it would be for Sunn O))) and Markus Popp were to get together and construct a world inside a snowglobe. In the context, the machine riddims, tumult, and squee sound like tunnels running beneath the Paradise – perhaps an imaginary soundtrack for Gepetto’s marionette armies in the comic series Fables? 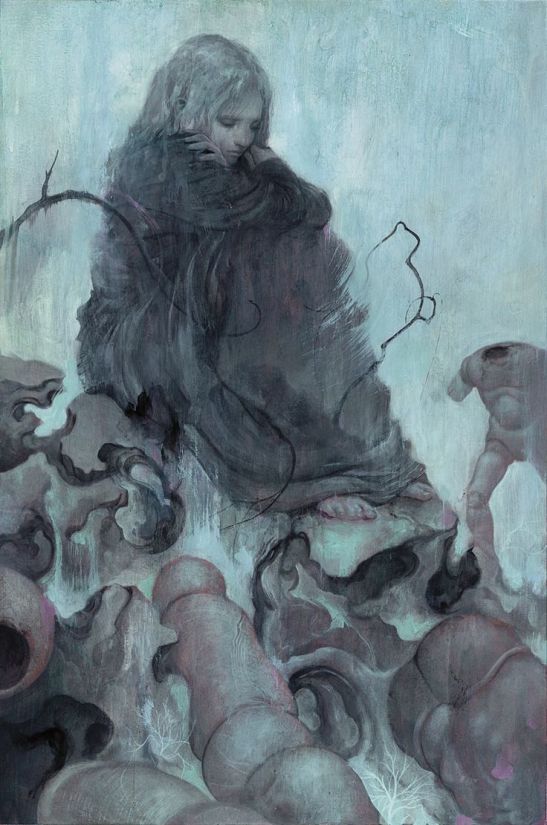 Aodron is one of the most enjoyable and cohesive Merzbow records i’ve heard in some time. The exquisite mixing and mastering makes repeat listening a meditative delight, pressing play over and over, letting Akita take us on a journey to the Green Side Of The Moon. It bodes well for Merzbow’s 2017 output, thus far.