Another week, another batch of outstanding, killer releases from every disparate genre. As usual, we’ve gone through the listings and picked out some of our favorite albums of January 25, 2019.

We’ve got hot, stylish, fashionable new hip-hop from Chicago’s Dreezy and Dawn Richards, who explores her Louisiana roots with futuristic beats and glistening, experimental soul on New Breed, a truly outstanding album and strong contender for one of this year’s best albums, even though 2019 is so young.

For the metalheads, we’re actually recommending an album bordering on emo, metalcore, and goth rock, all of which are nearly curse words around these turrets. Swallow The Sun’s  When A Shadow is Forced Into the Sunlight is a damn good metal record with a tragic origin story. That’s one of the beautiful things about ‘dark’ music. It’s an act of cultural alchemy, translating pain into the gold of inspiring art!

There’s several interesting psychedelic records this week, also. Eerie Wanda is like Zooey Deschanel jamming with The Pastels as the winter breaks into spring. Rival Sons is like Lightning Bolt getting together with Led Zeppelin. We haven’t recommended a blues rock record in a long, long time, so pay attention! Swervedriver return for their first album in several years, reminding us, one more time, that they might be the best American shoegaze band to have ever existed. And they sound better than ever on Future Ruins.

Then, finally, lastly but not leastly, there’s the sort of dancehall/Post-Punk hybrid of Sneaks’ stunning, ambitious, over-before-you-know-it new one, Highway Hypnosis.

Read on to find out more about our favorite albums of January 25, 2019!

Warm, sunny bedroom pop served slightly chilled. Like a less damaged Amy Winehouse or a less haunted Melissa Nadler, or if Zooey Deschanel were to get together with The Pastels. Perfect soundtrack for the thawing air. 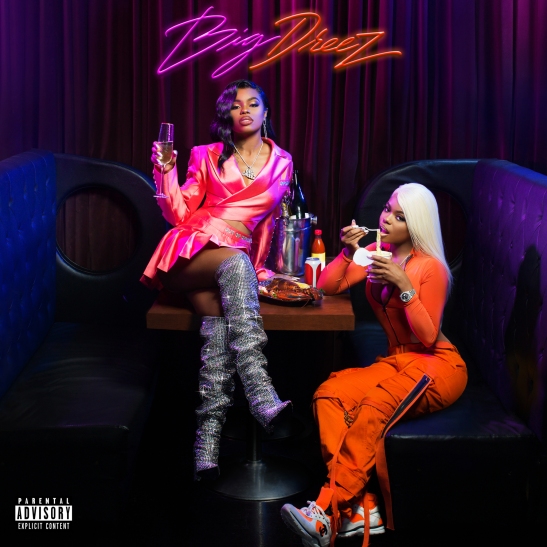 Chicago rapper’s first album in three years sets the bar high for lady rappers in 2019. It’s full of contradictions – stylish but detached, soft but hard as hell. Big Dreez is kind of like a mash-up between Lil’ Kim and Drake, but even better.

Second-act shoegaze is a funny, sometimes contradictory beast. While in the old days, bands would be pilloried for getting back together, usually billed as some kind of cynical cash grab, Shoegaze bands have a weird tendency to get even better with age. Maybe it’s just the natural mellowing of getting a little older, or the satisfaction of having actually accomplished something with your life. Or perhaps it’s the extra attention and the feeling of vindication, that they were right after all, and it was just the times that needed to catch up.

Swervedriver have always been one of, if not the, best American Shoegaze bands. No one is better able to blend the romantic detachment of the UK”s Shoegazer’s with the nitroglycerine rock ‘n roll that is the American id.

Not only are Swervedriver truly masters of Shoegaze-ing rock ‘n roll, they’re also an overlooked dream/noise pop band. Adam Franklin’s got one of the smoothest, most mellow voices in the business, for starters, and the bendy, swervey guitars give that ‘adjust your tracking’ feeling that we all love so much from Shoegaze.

It’s beyond thrilling to hear a band turning in some of their best material nearly 30 years into their career. Here’s to the survivors, the true artists who keep going, no matter what, staying true to their vision and voice. It’s paying off, in spades, with Swervedriver.

Swallow The Sun – When A Shadow is Forced Into the Sunlight

Pulling off a tasteful balance of epic, symphonic metal; crawling, sludgy doom; screeching black metal; and goth rock is no easy feat. Neither is following up a career-defining triple-LP. Swallow The Sun do both on When A Shadow is Forced Into the Sunlight.

Sadly, tragedy is the source of Swallow the Sun’s inspiration. Singer/guitarist Juha Raivio’s partner, Aleah Stanbridge of Trees Of Eternity, passed away in 2016. Raivio started a new project, Hallahar, to help process his grief. The shadows still followed him to the new Swallow The Sun LP album, like some doomed Edgar Allan Poe story.

At times, Swallow The Sun sound like classic ’80s death rock, like Type O Negative, or death metal, with a bestial growl. At others, they sound more like modern day emo/metalcore. None of these styles are this particular reviewer’s favorite, so the fact that this is getting a recommendation says something.

Surachai’s under-appreciated opus The Ritual asked the listener to imagine what a modular-synth wielding mage might look and sound like if making patches to rip holes between the dimensions or raise the dead. Come, Deathless, their first album in two years, begs the question what things might sound like once that rift is opened.

Heavy Blog is Heavy notes that Surachai is “electronic music for metalheads,” comparing them to acts like Autechre, Merzbow, Prurient, or Author and Punisher. They’re onto something there, but run through a filter of modern decayed, corruscated experimental techno. If Autechre’s glorious, elegant asceticism were rubbed in dirt and covered in iron filings, then thrown down some bottomless well, it might sound like Come, Deathless.

Toy – Happy In The Hollows

Millennial psychedelia is a strange beast. On one hand, it’s warm and woozy, calling upon the inherent nostalgia of ’60s worship. On the other, psychedelia always has a little bit of a dark side, the acid casualties to the sunshine and love utopianism, the paranoia at the center of seeing the bigger picture.

For their newest album and first for their own label Tough Love Records, Toy bring together these threads into a nuanced tapestry of shadow and light. There’s the lush digital infinitude of modern psychedelia like Melody’s Echo Chamber or Tame Impala, but it’s shot through with the more fucked up variety of the ’60s and ’70s – acid-damaged acid rock and futurist kosmische. They also take a page from latter-day retro revisionists like Broadcast or Stereolab, ripping apart the sounds of Bossa Nova, lo-fi Post-Punk, and far-out exotica, wrapping them all in a Beach House fever dream.

Never has the fear sounded so entrancing, so beguiling. Toy encourage us to lean into the shadows, to dwell and drown in the darkness and see what you find there. Miracles exist alongside the monsters. It’s worth it to look.

Mitski’s Be The Cowboy captured a lot of people’s imaginations last year, with its short, razor-sharp slices and sketches of life. Apply that same miniature outlook and songwriting approach and drop a sick dancehall beat beneath it, and you’re getting close to at least the attitude of Sneaks’ new one, Highway Hypnosis.

Highway Hypnosis is built around a framework of disjointed beats, which is woven through with atmospheric, deconstructed electronics. If an avant-garde digital dancehall project got together with a ’60s sci-fi score, it’d sound like minimalist bangers like “Beliefs.” Highway Hypnosis isn’t all electronic or beat-oriented, however. They veer into steely post-punk territory, at times, dishing out basslines Le Tigre would give their eyeteeth for.

Perhaps punk, hip-hop, and electronic music can come together again after all?

It’s a little surprising that one of the Earth’s most talented beat architects would deliver an album of ambient modular electronics. Luckily, Kid Koala proves to be as adept at constructing ambient sound meditations as he is at scratching and sampling.

Of course, it’s easy for ambient electronic music to get lost in abstraction and lose any bite it might have had. To bring some structure to the Io, Kid Koala brings in the talented vocalist Trixie Whitley to deliver a kind of post-r&b libretto, detailing the lives and loves of disparate characters. It’s like Aphex Twin’s Selected Ambient Works II paired with a collection of Raymond Carver short stories. And a little bit of Borges.

There’s a lot of drawing going on around Forestpunk HQ, between our monthly Cat Castle art show/performance series and our art/design collective Bitstar Productions. It’s always nice to have some more soundtracks for painting and collaging and such. Music To Draw To: Io! Is a very good one, indeed. 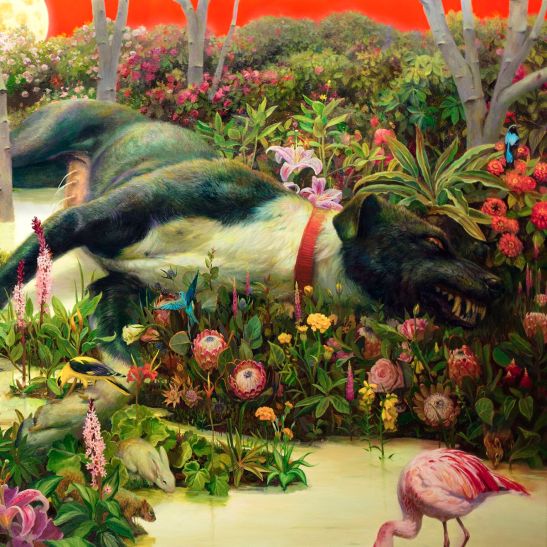 Feral Roots isn’t the kind of record you’d normally find on Forestpunk, but it fits right in when you really think of it. First of all, we’re huge fans of old blues, folk, early rock ‘n roll and rhythm and blues. Secondly, all praise to the margin dwellers and boundary pushers, for they keep music moving forward, defying boundaries and limitations.

At its core, Feral Roots is a really, really good roots rock record, erring on the glammy side, like early Led Zeppelin or The Rolling Stones. When you really listen, however, it’s laced with all kinds of modern flourishes – strange, alien choruses on the vocals; hyperfrenetic drum solos. It’s like Lightning Bolt getting together with The Pretty Things, but even better! There’s a little bit of trance rock and folk, as well, (“Look Away”) and some pastoral acoustic folk (“Feral Roots”). Honestly, it’s one of the best, most soulful rock-derived albums we’ve heard in a minute and that, alone, is worth of celebration!

Black To Comm’s Marc Richter is a success story of the drone underground, emerging from tiny, boutique labels like Dekorder and Digitalis Industries for ever higher-profile releases. His last album, the self-titled double-LP, found a proper spiritual home on Type Recordings, with their lavish packaging and microscopic attention to the sounds of the natural world. Richter’s move to Thrill Jockey speaks both to his continued excellence, as well as the continuing evolution of the Chicago Post-Rock label.

Seven Horses for Seven Kings is seeped in ominous dread, coaxed out of classical instruments (seemingly). Violas and fiddles moan and groan, while scraping metal and atmospheric rumbles beat like bat wings in the distance. It brings to mind the foggy expanse of 1922’s Vampyr or the oppressiveness of M. R. James’ short stories.

Black To Comm has as much nuance and control as these legends. Seven Horses for Seven Kings is the work of a master at the peak of their game. It’ll appeal to fans of horrorscores, drone afficionadoes, and metalheads alike!

Discovering a regional identity in Louisiana is particularly difficult. More than nearly any other state, it’s built on layers upon layers of disparate histories and cultures. French, Italian, German, Native American, and African-American cultures come together in a beautiful, delicious melange that’s evident in everything from their food to their music.

It does make it a little tricky to separate the individual elements, however. It’s even trickier in the wake of Hurricane Katrina, with so many Louisianans being displaced and scattered to the winds.

This serves as the basis for Dawn’s fantastic new LP. She’s truly at the forefront of futuristic beat construction, with glistening, razor-sharp trap beats meeting disorienting samples ripped from their context, providing a surreal, bizarre, and interesting road trip of the mind.

Experimentation and musicality are evenly matched on New Breed. It’s chock full of bangers and bops, with disco funk tracks like “Dreams and Converse” and “Sauce”. These blur and melt into more experimental offerings, like the chopped ‘n slurred of “Jealousy.” There’s something for pretty much everybody on this outstanding LP. We wouldn’t be surprised if this ended up on some Best of 2019 lists, even though it’s out in the first few weeks.