Lovecraft Country is an action-packed adrenalized horror set in Jim Crow America. It’s a clever way to tackle the problematic aspects of Lovecraft’s writing and personality and his horrific legacy, at the same time. 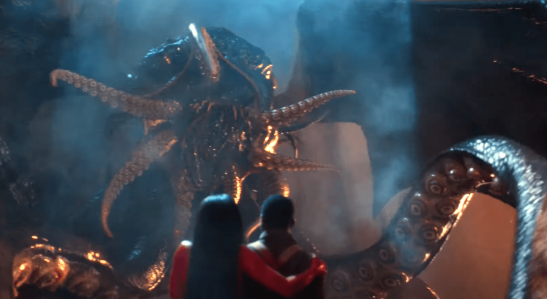 Weirdly enough, tentacled batrachian horrors and many-eyed Shoggoths are not the scariest aspect of Lovecraft Country. The reality inhabited by its African-American central cast will turn your blood to ice. AND it’s entirely real, and tragically common still, even in 2020.

Lovecraft Country takes place in 1954. It begins with our main character, Atticus “Tic” Black (Jonathan Majors) having a dream. He’s on a battlefield, looking like WWI trenches, which quickly dissolves into a pulpy sci-fi maelstrom, like something from the Ray Bradbury and H. G. Wells novels Tic loves so much. He comes face-to-face with a tentacled Great Old One within the first 2 minutes of the series, who’s made short order of by baseball legend Jackie Robinson. He awakens on the back of a segregated bus, en route from Florida to Chicago.

Is it subtle? No. It IS, however, exactly what’s called for, calling Lovecraft’s pulpy, sci-fi origins into focus and placing his Cosmic Horror in a kind of American dreaming.

Cut to South Chicago in a heatwave. Little kids are playing in a fire hydrant before having their fun killed by a white cop. Tic is visiting his uncle, George Freeman (Courtney Vance), who runs a travel agency and publishes a guidebook the Safe Negro Travel Guide. Uncle George shows himself to be a thoughtful and loving husband and father in a tender and very real scene with his wife, Hippolyta (Aunjanue Ellis), dragging the morning out in bed. We also meet their daughter, Diana (Jada Harris) who draws an adorable sci-fi comic book and illustrates a map of the Travel Guide, depicting dangers as trolls, werewolves, Grim Reapers. Tic comes to his Uncle’s house hoping to find his estranged father. No one’s seen him, but Tic has a letter from his dad hinting that he’s going to look for his wife’s ancestral family in “Lovecraft Country,” a mysterious town called Ardham in a white supremacist enclave called Dover County.

During a block party that evening, we meet the final member of our traveling triptych, Letitia “Leti” Lewis (Jurnee Smollett). Letitia’s an idealistic free spirit who comes to ask her sister for a place to stay. She agrees, reluctantly. It seems Letitia has a knack of alienating family as we’ll find later in the episode. 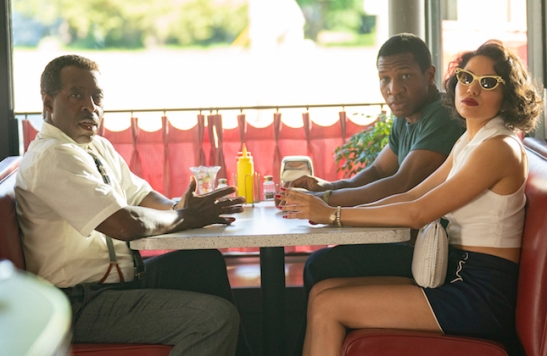 On their cross-country trip, George, Tic, and Leti stop to do some research for the travel guide. It seems their records aren’t quite up-to-date, as Tic notices that the current restaurant is covering up signs of burn marks. They’ve got to make a quick getaway, resulting in the episode’s first car chase. They’re saved by a mysterious silver car that slides in front of their pursuers, who are then thrown into the air when it runs into… something.

Finally, the trio reach Dover county, but the road to Ardham is overgrown. They encounter the local sheriff, Eustace Hunt (Jamie Harris) and three lackies. They threaten to pin some local burglaries on the travel party when a sound rustles in the woods. The Cosmic Horror emerges, with some many-eyed shoggoths biting heads and limbs off of bigots.

Tic and Leti beat a retreat, leaving Uncle George trailing, who’s able to discover that the monsters seem to be sensitive to light. They also seem to be contagious, as the Sheriff, who’s had his arm bitten off, transforms into one of them when they’re barricaded in a decrepit old cabin. He quickly dispatches the other lackey and then bounds off into the woods.

As the episode concludes, the trio walk up to a well-manicured lawn of an estate in Ardham. A tale, pale, slightly sinister white man opens the door with the greeting, “Hello, Mr. Freeman. We’ve been expecting you?”

Lovecraft Country really begins with a bang. There’s an almost ridiculous amount of action in the first episode, raising hopes that the series will be a fun, action-packed romp through Lovecraft’s many-eyed mythos. It’s also legitimately chilling and heart-breaking, when we remember that the day-to-day horrors were a daily reality for people of colour in this country. And, tragically, still are, far too often.

My heart skipped a beat during the credits when i was reminded that Jordan Peele’s producing Lovecraft Country. I’m a huge fan of Peele and his razor-sharp satire of race relations in America. That, with some top-notch acting and top shelf production values, makes me even more excited for Episode 2. And i’ve been looking forward to Lovecraft Country since February!

My only quibble is some of the music direction and a couple of small changes from the novel by Matt Ruff, which i’ve been reading lately so the details are fresh in my mind. I don’t understand some of the chronological shifts from the book, nor why they gender-swapped Uncle George’s child, the comic book artist and illustrator. Hopefully it’s just because they found a better actress than for some sort of political reasons, but it doesn’t matter much either way. And a sudden, abrupt moody hip-hop song in the South Chicago sequence kind of breaks the spell and takes you out of the time period, which just strikes me as a misstep. Everything else in “Sundown” is period specific and super authentic, so that just seemed like a weird choice to make.

“Sundown” is a fantastic start to one of my most anticipated series of the year, though, and they’ve more than surpassed the hype.

Did you watch the season premier of Lovecraft Country? If so, what’d you think?